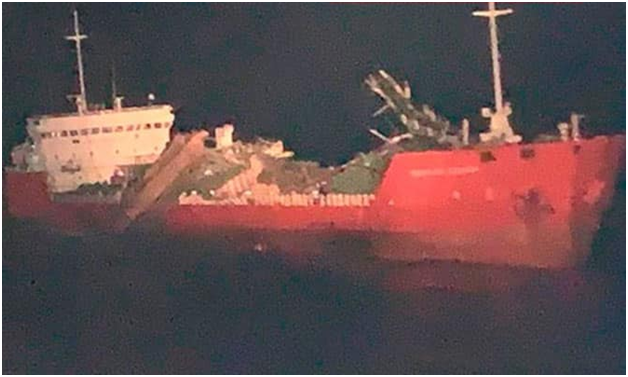 Product tanker GENERAL HAZI ASLANOV suffered explosion and probably, fire, at around 1600 UTC Oct 24 in Azov sea north of Kerch Strait, while en route from Kavkaz port anchorage in Black sea, to Rostov-on-Don, Azov sea, Russia. Tanker was in ballast, explosion occurred understood, in an empty cargo tank, resulting in a hull breach above waterline. 3 crew were thrown overboard by explosion – probably they’ve been carrying out maintenance wielding works, which sparked off explosion, according to Russian emergency agency. Contradictory reports concerning ensuing fire – it is not yet clear, if there was fire after explosion Of 13 crew, 3 are missing, 6 evacuated, 4 remained on board. Tanker was towed back to Kerch Strait outer anchorage in Azov sea.

Understood this is the photo of tanker GENERAL HAZI ASLANOV after explosion, posted in one of Russian social nets: