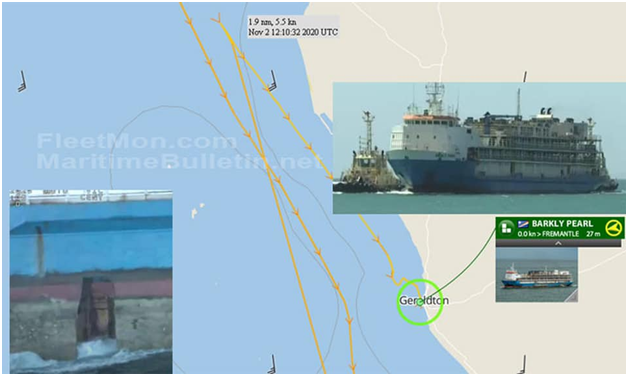 Livestock carrier BARKLY PEARL was ordered to interrupt her voyage and call Geraldton, Mid West Australia, in the evening Nov 2, in unclear circumstances. AMSA and Mid West Port Authority said, according to news outlets, that the ship suffered starboard hull breach and developed heavy list, so much so, that she had to be taken on tow, and towed to Geraldton, arriving there in the afternoon Nov 3 Local Time. The ship was reportedly, heading for Indonesia, with no livestock on board, in ballast.

Was there any real accident and danger to ship, or was it something else?

A damaged livestock carrier has been brought into Geraldton for safe harbour, with all crew reportedly in good health and not displaying any covid-like symptoms. The Australian Maritime Safety Authority (AMSA) ordered the MV Barkly Pearl into Geraldton Port after it sustained a damaged hull about 120 kilometres north of the Mid West town. It had been en route from Fremantle to Indonesia and had no livestock onboard. Vision of the vessel shows it listing with a hole in its starboard hull. AMSA response manager Mark Morrow said there were significant concerns about the vessel and its ability to safely reach Indonesia. “We held concerns about the integrity of the vessel and the potential for environmental issues,” Mr Morrow said.”As a result, AMSA issued a direction for the vessel to make its way to safety in the Port of Geraldton.”