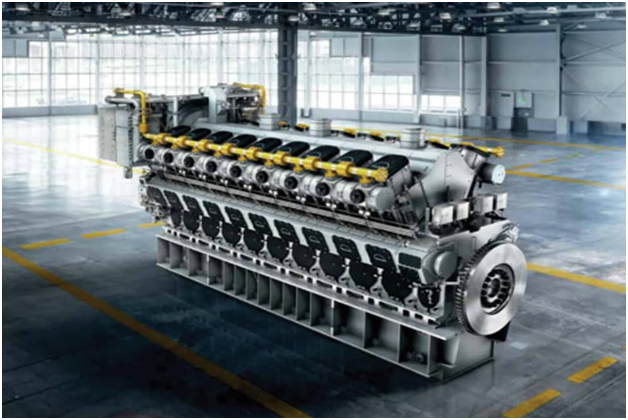 -Greater use of LNG, ease of maintenance and fuel flexibility all favour the use of gas turbines in the merchant shipping sector.

-Gas turbines can be competitive with reciprocating engines in terms of efficiency.

Are gas turbines, a viable alternative to piston engines, reviews an article in Riviera Maritime Media.

Gas turbines offer several advantages over reciprocating engines, including higher power density, lower emissions and ease of maintenance. They have found a niche onboard naval ships and pleasure yachts, where their advantages are highly valued.

The simplicity of direct propulsion and the higher efficiency offered in that configuration by reciprocating engines have ensured that piston engines have remained the technology of choice for merchant ships.

But largely due to the greater use of LNG – that gas turbines can burn efficiently and cleanly – coupled with increasing concerns over emissions and the requirement for fuel flexibility such as the need to burn hydrogen, gas turbine vendors such as GE and Solar Turbines are seeing an opportunity.

There was a surge of interest in gas turbines in the late 1990s and 2000s, but merchant ships remained out of bounds for the machines. “What hurt us then was the fuel price; the spread was two times on a tonnage basis,” says GE Marine’s director for commercial marine applications Mark Lipton.

Gas turbines in ferries and cruises

Mr Lipton notes that gas turbines have made headway into fast ferries and cruise ships in the last 20 years. In 2013, Francisco, built by Australian shipyard Incat and powered by two LM2500s with LNG as primary fuel, achieved 58.21 knots. The Buquebus-owned ship services passengers crossing the River Plate between Argentina and Uruguay.

Mr Lipton recalls Queen Mary 2 as another successful application of gas turbines. He says with shore power available in ports and routes optimised, cruise ships can make do with just one LM2500 (25 MW) instead of two.

“Our value story continues to be in low emissions, simpler operation and ease of maintenance,” he says. Gas turbines can now burn a fuel mix of over 80% hydrogen and the rest, natural gas. “Opting for gas turbines would make merchant ships future ready in terms of fuel flexibility,” he adds.

As combined cycles, gas turbines can be competitive with reciprocating engines in terms of efficiency.

GE claims that for a 20,000 TEU container ship burning LNG, a combined gas turbine electric and steam (Coges) system would have 10% less operating expenditure compared to a pilot fuel reciprocating engine with Tier III NOx compliance. Though LNG fuel costs would be slightly higher, substantial savings in maintenance and the cost of marine gas oil (MGO) pilot fuel are claimed.

Mr Lipton says that for newbuild LNG carriers, Coges will have the least operating cost compared to the two leading gas engine configurations on the market. A 174,000 m3 newbuild LNG carrier’s cargo capacity can be increased by 4,000 m3 as a result of the space saving, he adds.

The Coges system must be configured as per the mission profile, explains Mr Lipton, “Operating speeds used to be 20 to 22 knots for container ships. Now they are less. Combined cycles of 30 to 40 MW can operate efficiently upward of 16-18 knots. Slow steaming of around 12 knots may work better with a combined cycle system that features a smaller gas turbine.”

Retrofitting existing LNG carriers is a target market for GE. Mr Lipton says these ships have at least another 15 years of life left in them. They are powered by steam turbines or hybrid supercritical steam and medium-speed diesel engines.

These ships are unable to compete with LNG carriers with dual-fuel diesel engines because of lower efficiencies, he says, adding that retrofitting a gas turbine combined cycle system will save millions of dollars in fuel cost alone.

-A Coges system will make optimum use of the existing installed equipment, but conversion will involve some adjustments in the engineroom.

-The steam turbine generators, along with the main condenser and two of the three turbofeed pumps in the existing LNG carrier, would be retained in the bottoming cycle of the gas turbine.

-A new heat recovery steam generator (HRSG) would be fitted. The dual-fuel main boilers would be retained to assist in providing steam for power generation, if the gas turbine is not operating during cargo operation.

Gas turbine output is sensitive to ambient air temperature. For this reason, unlike the reciprocating engine or even the boiler, the intake should be located outside the engine room.

Solar Turbines, the leading manufacturer of land-based gas turbines in terms of number of machines produced in a year, sought to counter the idea that the poor part load efficiency of gas turbines is a major hindrance to its adoption.

A company presentation noted that since more than 90% of the fuel burned is out at sea, part load efficiency is not a significant factor. The presentation highlighted the fast ramp rate of gas turbines and highlighted that a battery system can be offered that would significantly improve performance in ports and during maneuvering. The gas turbine can be enclosed in a package with a noise limit of 85 dB.

DNV GL concluded that the use of gas turbines can significantly reduce emissions from ships. The components can be off-the-shelf and ready to enter the order books, it noted. Yet, the new 23,000 TEU class of container ships ordered by CMA CGM continue to use reciprocating engines.

DNV GL Maritime’s senior principal specialist for gas technology Henning Pewe says the market is not yet ready for gas turbines in merchant ships. Ten years ago, container ships of 10,000 TEU had 66 MW power; today, 23,000 TEU ships have 50 MW. The power demand is decreasing and there is a drive towards slower steaming.

Combined cycles can compete with piston engines on efficiency but the space, weight and configuration have to be optimised, he says. “It might also be that ship operators don’t dare to pioneer a technology. They may prefer to wait for others to be the first adopters and learn from their experiences. We have seen this in many cases, such as in ballast water treatment and scrubbers,” Mr Pewe says.

LNG membrane tank supplier GTT has worked with CMA CGM and Solar Turbines to study the application of gas turbines. “Gas turbines are compact, have no methane slip and, as combined cycles and cogeneration systems, have high efficiency,” says GTT’s vice president for LNG as fuel directorate Julien Bec.

“The drawback is that, so far, gas turbines have not been widely used by the maritime industry and owners baulk at too many innovations. Besides, turbine efficiency decreases dramatically with partial loading (e.g. during manoeuvring).”

“Nevertheless, I do believe that gas turbines will make their way into the market. In cruise ships, their space-saving nature can be a decisive factor. Besides, the price gap of these systems versus the standard dual-fuel engines is relatively less important if you compare it with the price of the entire cruise ship. In container ships, however, this may not be the case,” he says.