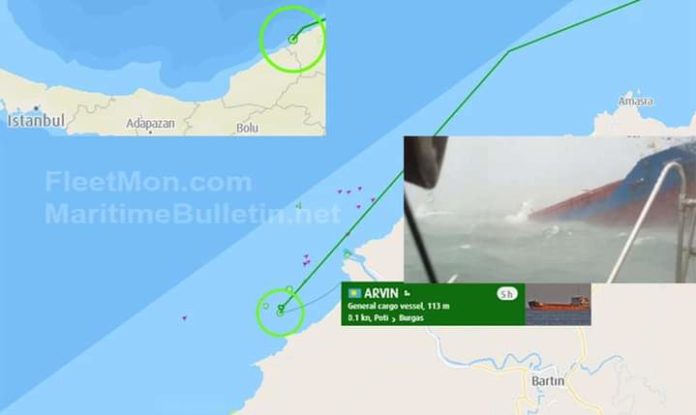 General cargo ship ARVIN with 15 crew on board reportedly sank or sinking at Bartin anchorage, Turkey, Black sea coast, on Jan 17. Two crew reportedly died, SAR was still under way as of 1130 UTC Jan 11. The ship was en route from Poti Georgia to Burgas Bulgaria, and obviously, anchored at Bartin anchorage in an attempt to shelter from storm. Most probably, she couldn’t stand against strong wind and waves and either broke in two, or was overwhelmed, while being anchored. ARVIN is a river-sea cargo vessel type, vulnerable to strong storm at sea, because their structural strength isn’t sufficient enough to be fully seaworthy – they’re too long and narrow.
UPDATE: 4 dead crew were recovered, 6 crew were rescued. According to latest updates, all-Ukrainian crew consisted of 13 sailors, so 3 remain missing, SAR suspended until daytime.