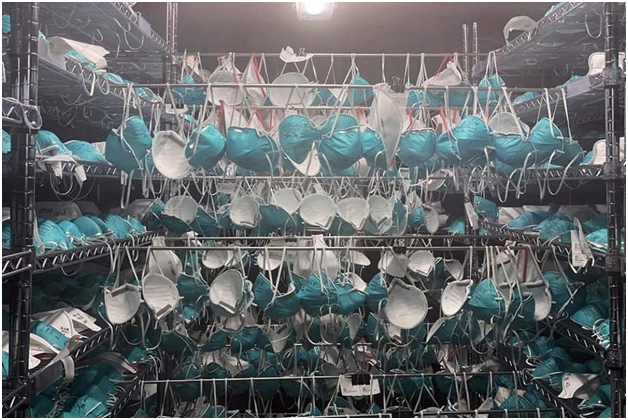 -Masks have gone from optional to mandatory in many states.

-People are wearing masks everywhere without observing the six feet.

-Masks are essential but they might be having an effect on our behavior.

-Wearing a mask in public will only make us more comfortable with the practice of going outside.

-Overconfidence coupled with confirmation bias is a natural tendency to look for proof of our own assumptions.

-Experts believe people have written off the dangers of COVID-19.

According to an article published in Fast company and authored by Mark Wilson, wearing a mask can help reduce the likelihood of being infected with COVID-19. But masks alone are far from perfect.

Over the past two weeks, as masks have gone from optional to mandatory in many states, I’ve noticed a shift in behavior. I’ve seen people wearing masks at small get-togethers and people wearing masks in stores—all without observing the six feet of social distancing recommended by the Centers for Disease Control and Prevention.

At least they were wearing masks at all! Still, I wondered, could masks be creating unintended consequences? Could a mask provide such a strong sense of security that people have become lax in protecting themselves in all the other ways that are recommended?

“It’s a good question, and it’s a sensible hypothesis,” says J. Edward Russo, a professor of management and organizations and of marketing at the Johnson Graduate School of Management and a member of the Field of Cognitive Studies at Cornell University. Russo, along with two other experts in psychology and public health I spoke to for this piece, agreed: We should absolutely wear masks, but we should also be cognizant of the effect they might be having on our behavior.

A false sense of security

Before Joyce Ehrlinger was an assistant professor at Washington State University, and before she took her current position researching behavioral insights at the investment company Robinhood, she wrote her dissertation at Cornell on a fascinating topic: unintended consequences.

In the world of design, unintended consequences are fairly common. Something is built with the best of intentions, but it causes surprise problems.

Ehrlinger points to crosswalks, trampoline guards, and pool floaties as all being seemingly beneficial developments that come with unintended consequences. “There are times when safety measures can do more harm than good,” she says.

The American Board of Pediatrics, meanwhile, has waged a multidecade war against trampolines because they cause so many injuries for kids. In 1997, the trampoline industry began offering nets and other safety add-ons that could supposedly protect from various injuries. But a 2012 study published in Pediatrics concluded that “there does not appear to be an inverse correlation between the presence of safety equipment and rates of injury” before adding that the very presence of these safety features “may provide a false sense of security.”

And while Ehrlinger could not find any particular studies on pool floaties (armbands or rafts), the United States Lifesaving Association, Lifeguards Without Borders, and the CDC concur that children who lack swimming skills shouldn’t be using these items in pools. Why? They create a false sense of security for the swimmer and the guardian, when in fact it’s easy for a floatie to pop off or for a child to end up trapped under a raft.

Even bike helmets create unintended consequences for riders. A 2007 study found that cars drive 3.3 inches closer to cyclists who wear a helmet than to those who don’t. Ironically, that would suggest the same cyclists donning protective gear are more likely to need it.

When I propose the idea that masks might be reducing our drive to the social distance to Dr. Roger Chou, he agrees it’s possible. “I think that’s a potential unintended consequence,” says Chou, who was the lead researcher on a landmark WHO study on masks. “It’s like with [football] helmets and concussions. You think they would protect people, but there is some data that people are more reckless when they think they’re protected. This is maybe something similar.” Indeed, football helmets have eliminated skull fractures in the NFL, but they’ve led to a harder, faster-paced game over time—and haven’t protected players from brain damage.

The lure of confirmation bias

Over time, wearing a mask in public will only make us more comfortable with the practice of going outside. “I think, every time I leave the house, go shopping, and don’t come back and instantly start coughing and die, I feel a little more confidence, braver, and I am probably less careful,” says Ehrlinger.

Russo points to McKinsey’s research that’s pegged the two most common behavioral flaws of CEOs. The first is overconfidence, and the second is confirmation bias—or our natural tendency to look for proof of our own assumptions.

In this case, Russo believes that wearing a mask is ripe for confirmation bias.

“People believe what they want to believe. They want to go back to normal. And if I believe wearing a mask lets me go back to normal, I can go out, talk to people, get my bike fixed, go shopping, and get on public transportation,” says Russo. And every time someone doesn’t get ill as a result—which is a lot, given that COVID-19 has a lengthy incubation time in which a carrier is asymptomatic—it further confirms the safety of their own behavior.

“There’s a second part I think is more important psychologically,” he continues. “We only know what we want to know.” And that is another form of confirmation bias.

Russo believes that many people have written off the dangers of COVID-19 in the same ways they’ve been able to write off climate change. “There are a lot of people who don’t want to believe something, who won’t believe it until they see it and feel its impact on themselves,” says Russo. Of course, there are political overtones here—Fox News denied the dangers of COVID-19 for months as a liberal conspiracy. But Russo also sees this tendency as human nature, and he points to how many people readily build houses in known flood plains, despite the risks.

People who haven’t been personally affected by the coronavirus or don’t know someone who’s had the disease might feel that it’s abstract and not relevant to their daily behaviors. “They won’t believe it until it hits them,” says Russo. “And that’s [societally] dangerous for things like the virus and global warming; it’s more personally dangerous for floods and fires.”

Is there any solution?

So assuming that wearing a mask really does make us overconfident and cause us to drop our guard with social distancing over time, is there any solution?

“I don’t think it has a simple answer. For any problem you want to solve, you have to know the cause,” says Russo. “I don’t want to make it more complex than it is, but different people choose to treat masks more casually, or the virus more casually, for different reasons. Some don’t want to change, some want the economy to support a political persuasion, some have a machismo, some people might be 22 . . . and it’s their senior year of college, and they are going to go to spring break no matter what.” Each of these types of people would require a different type of intervention, Russo says.

Is it possible to educate everyone in the world to challenge their own biases and break their bad habits? Of course, it’s not. But much like wearing a mask in the first place, every bit of effort helps in thwarting the spread of COVID-19. So we might as well try.