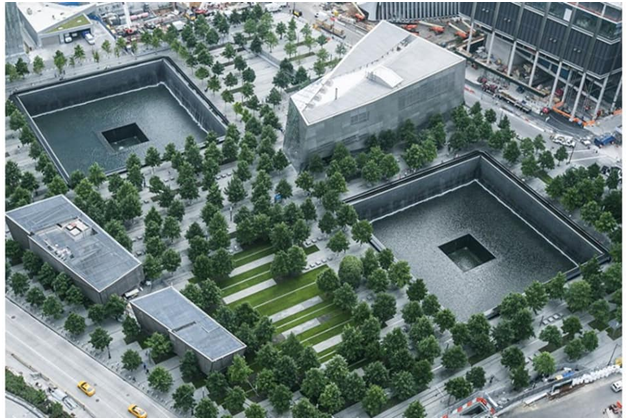 -New York’s Twin Towers undergo a halt in construction due to the COVID-19 pandemic.

-Number of visitors has reduced drastically since the virus outbreak.

-Silverstein and Libeskind, the master planners are hopeful that their construction plan will not fail.

Now as the 19th anniversary of 9/11 approaches, the grand vision set forth after its destruction has largely been realised. But the rebuilt World Trade Center complex is under threat anew-this time, from a microscopic virus, reports Reuters.

New hurdle for the towers

After the twin towers and surrounding buildings were destroyed by al Qaeda hijackers, killing 2,753 of the nearly 3,000 people who died that day, the economy of Lower Manhattan was devastated.

But a plan was born, and a lengthy metamorphosis turned the disaster zone into a giant pit, then a walled-off construction site, and finally some $21bn later, a tourist attraction and business centre with three skyscrapers, a transportation hub, a museum and a memorial.

The coronavirus pandemic has stalled its completion, with a performing arts center under construction and a fourth and final skyscraper planned.

Six months after New York City began shutting down due to COVID-19, the World Trade Center and the once-bustling Financial District are now eerily devoid of crowds.

The public and private sectors have invested some $25billion in reconstruction, according to the Port Authority of New York and New Jersey, which owns the land.

“Everybody coming to New York wants to come to Ground Zero,” Libeskind said in an interview. “It is the centre of New York. It is a great public space.”

At its heart are two reflecting pools designed by Michael Arad, marking the footprints of where the Twin Towers once stood, with a pair of four-sided waterfalls draining into an abyss. The names of the victims are etched into its bronze borders.

Pre-pandemic, hundreds of visitors would gather there. But on a recent afternoon, a family from Kansas, were the only people at the south tower pool.

Nostalgia over the Twin Towers grew after they were destroyed along with so many innocent lives, but they were unloved in their time.

Planning the new site stirred public emotions associated with the attack on the United States, the loss of life and fears of working in tall buildings again.

“They did a really wonderful job of knitting it back in the city, but still honoring that sacred site,” said Leslie Koch, president of the complex’s Performing Arts Center.

Developer Larry Silverstein acquired a 99-year lease on the Twin Towers from the Port Authority for $3.2 billion just six weeks before 9/11. He has spent the last 19 years rebuilding.

In 2015, Silverstein forecast the entire site would be rebuilt by 2020, but that changed after the planned anchor tenant for 2 World Trade Center was pulled out.

“Life is so unpredictable,” he said.

Silverstein and Libeskind, the master planner, see the pandemic as a temporary pause in downtown Manhattan’s ascendance, noting how predictions of decline after 9/11 proved wrong.

“People said New York will never come back. And it’s the same thing during the pandemic,” Libeskind said. “But I don’t believe it. New York is too resilient.”