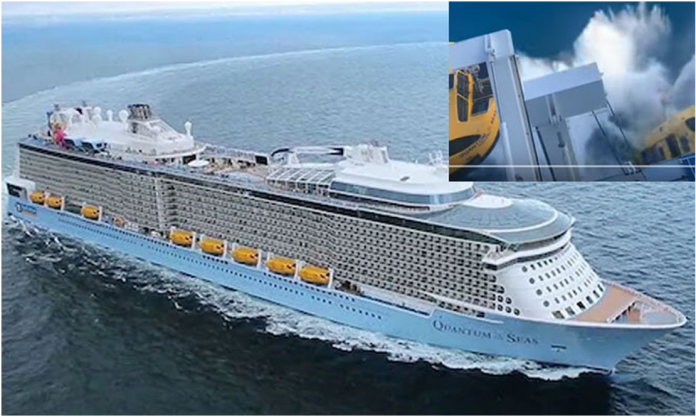 On December 1, 2022, a lifeboat from Royal Caribbean’s Quantum of the Seas detached from its davits and fell aft-first into the water.

The lifeboat accident occurred during what appears to have been crew training or tendering operations.

This is not the first time that a lifeboat fell off of a cruise ship.

In December 2018, a lifeboat broke free from the Carnival Dream in the Gulf of Mexico as the Carnival cruise ship was sailing back to New Orleans on December 30th. Initial reports suggested that the lifeboat (photo right) sheered from the davit hook and fell into the water. Fortunately, there was no one in the lifeboat at the time.

Earlier in 2018,  a lifeboat on P&O’s Arcadia broke from its cabling and fell from its davits into the sea while the cruise ship was in Ponta Delgada, Azores.

In 2017, a lifeboat broke free from Royal Caribbean’s Grandeur of the Seas in the port of Charleston due to a frayed cable.

In 2013, a cable to a lifeboat on Royal Caribbean’s Allure of the Seas  snapped while the cruise ship was in Nassau.

In September of 2016, two crew members were killed and other crew members were critically injured after a lifeboat fell from the Harmony of the Seas, which was docked in Marseilles, France. Five members of the ship’s navigation crew were on board during a drill when the lifeboat became detached and fell ten meters into the water.

Eight crew members were in a lifeboat during a drill in 2013 on the Thomson Majesty cruise ship when the lifeboat plunged 60 feet into the water. The lifeboat landed upside down. Five of the crew were killed and three were injured.

In July of 2016, a rescue boat drill resulted in the boat falling into the water with four crew members from the Norwegian Breakaway while the cruise ship was in Bermuda. Two crew members were killed and two other seriously injured.

Between these two events, there have been several other lifeboat mishaps. In January of 2016, a cruise ship tender boat on the Balmoral operated by Fred Olsen Lines malfunctioned, during a scheduled boat training drill while the cruise ship was docked in Funchal, Madeira. Fortunately, no one was injured. In August 2015, an excursion boat from the Costa Mediterranea (photo right) apparently broke a cable while it was being lowered in Montenegro. Photographs sent to me shows what appears to be a lifeboat dangling on the side of the Costa cruise ship. In October 2014, a rescue boat on the Coral Princess was being raised on davits with two crew members aboard when a cable snapped and a crew member was killed.

There is a popular saying that lifeboat drills kill or seriously injure more people than save lives.

Quantum of the Seas is on a 10-night round-trip cruise from Brisbane, Australia, and was visiting Mystery Island in Vanuatu on the day of the incident, according to Cruise Hive.