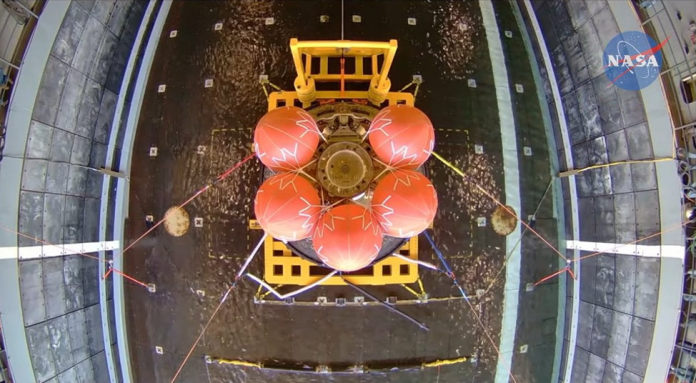 The post has been updated with a statement from NASA.

A team of sailors aboard USS Portland (LPD-27) recovered an Orion space capsule after it splashed down in the Pacific Ocean on Sunday after a 25-day trip around the moon.

Orion is an unmanned capsule that was launched into space on Nov. 16 as part of the Artemis I lunar orbit mission. During its time in space, Orion traveled 1.3 million miles, according to NASA.

“Upon Orion’s successful splashdown in the Pacific Ocean west of Baja California… flight controllers in mission control at NASA’s Johnson Space Center in Houston spent about two hours performing tests in open water to gather additional data about the spacecraft, including on its thermal properties after enduring the searing heat of re-entry through Earth’s atmosphere,” reads a Sunday evening statement from NASA.

“The ship will soon begin its trip back to U.S. Naval Base San Diego, where engineers will remove Orion from the ship in preparation for transport back to Kennedy Space Center in Florida for post-flight analysis.”

As Orion returned home, the capsule passed within 60 miles of the moon, according to NASA. Orion used the moon’s gravity and the European Service Module to make its way back to Earth.

The capsule entered Earth’s atmosphere at 25,000 mph, which will produce temperatures of around 5,000 degrees Fahrenheit, according to NASA. It slowed to 100 mph as it approached the Pacific Ocean with the help of three large white and orange striped parachutes that deployed to slow the capsule down before it landed in the water.

Once Orion splashed down — about five nautical miles from Portland — Navy divers and members of NASA’s Exploration Ground Systems boarded small boats from the amphibious warship to the capsule. An MH-60S Knight Hawk helicopter circled the capsule, as well. The divers inspected it for hazards before hooking up the tending and tow lines.

Once hooked up, sailors and NASA specialists started to haul Orion into Portland’s well deck. As of Sunday afternoon, the operation to move the capsule into the ship had started.

Artemis I is meant to test NASA’s ability to do deep space exploration, flying around and beyond the moon. The uncrewed capsule allows NASA to collect data on how the spacecraft performed and what environments astronauts may experience before reentry.

While there is no crew inside the capsule, there is a manikin — Cmdr. Moonkin Campos — with sensors attached, will give NASA scientists data on the acceleration, vibration and radiation. Campos is joined by two other manikin crew members — Helga and Zohar, according to NASA..

NASA will follow the Artemis I with a crewed mission to test how the capsule performs with astronauts aboard. NASA has not yet determined when the crewed mission will launch. Data collected from Orion will help inform the timeline.

The Navy has been practicing for several years to recover the Orion capsule once it makes its watery landing off the coast of the Baja peninsula, near Guadalupe Island. Portland was underway with Littoral Combat Ship USS Montgomery (LCS-8) which provided security for the splashdown site.

The Navy provides San Antonio-class amphibious transport dock ships for the recovery of the Orion capsule as part of a partnership between NASA and the sea service.

The extensive aviation and medical facilities aboard San Antonios designed to support combat Marines made the ships an ideal platform to recover the capsule.

The partnership with the Navy and NASA extends back 45 years to the last time the Navy recovered a deep space capsule. That time it was the Apollo 17 mission, USNI News previously reported.

Back then, the Navy would use divers and helicopters to deliver astronauts and capsules to an aircraft carrier. The new Orion is too heavy to be carried by helicopter which resulted in NASA and the Navy using a ship with a well deck.