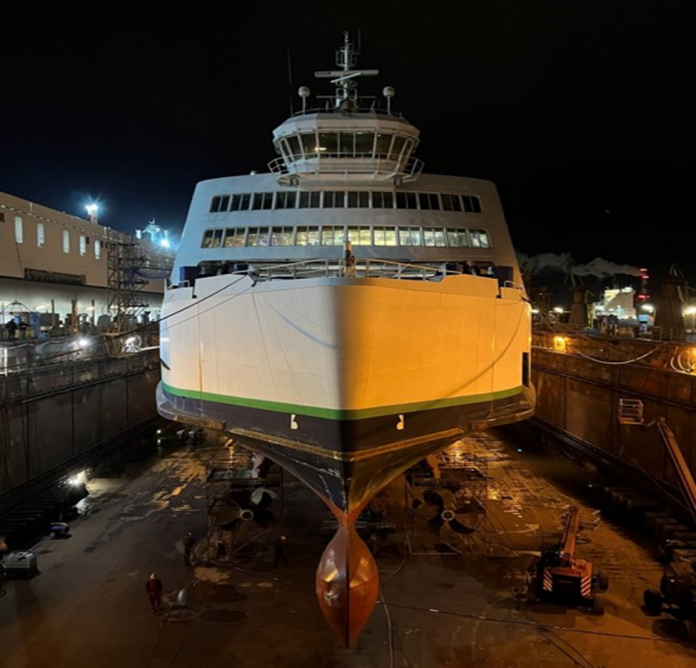 Danish ferry operator Scandlines has completed a more than EUR 13 million investment project in upgrading the Fehmarn ferries and at the same time significantly reduced its environmental impact.

As the last of the four hybrid ferries operating between Puttgarden (Germany) and Rødby (Denmark), the double-ended ferry Prinsesse Benedikte has just had four new thrusters installed. The new thrusters are far more efficient and thus energy-saving than the previous push thrusters.

The propulsion system of the hybrid ferry consists of four thrusters – one at each corner of the ferry. The whole entity (thruster) can rotate around its vertical axis and thereby function as a rudder. The new thrusters ensure a more homogeneous flow through the water, resulting in less noise and vibration. Less underwater noise and less vibration provide better conditions for marine life in the Fehmarnbelt, including harbour porpoises. In addition, the more homogeneous water flow ultimately reduces emissions, including CO2.

Together with the new thrusters, head boxes were installed which slightly change the ship hull around the thruster to further optimise the water flow to the propeller.

A total of 16 thrusters were replaced on the four hybrid ferries operating on the Fehmarnbelt.

“With the completed project, we have reduced CO2 emissions from the hybrid ferries by up to 15 percent and thus taken an important step towards zero-emission ferries on the Puttgarden-Rødby route. We are very pleased that this can be combined with less impact on the marine environment in the Fehmarnbelt,” Michael Guldmann Petersen, COO of Scandlines, commented.

The 16 new thrusters as well as the new thruster control system for the bridge of each vessel have been delivered by Kongsberg Maritime.

In parallel with the replacement of the thrusters of the hybrid ferries, Scandlines’ simulator in Puttgarden has also been upgraded so that the crew has been optimally prepared for the new propulsion system.

Climate and environmental issues have long had top priority on Scandlines’ agenda. As early as 2013, the ferry company invested in hybrid ferries with battery banks, and in 2024 the first zero direct emission ferry will be inserted on the Puttgarden-Rodby route.