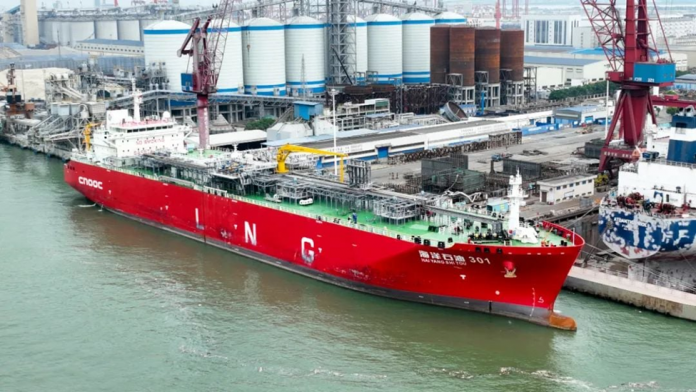 The vessel is China’s first LNG bunkering vessel and it was converted from an LNG carrier for China National Offshore Oil Corporation (CNOOC). It was built by Jiangnan Shipbuilding and delivered in May 2015. The conversion project was launched back in August 2022 at GSI’s Wenchong yard.

The bunker vessel, spanning a total length of 184.7 meters and a molded width of 28.1 meters, can carry 30,000 cubic meters of liquefied natural gas. During the conversion process, the vessel was fitted with key equipment such as cryogenic units, gas combustion devices, ship-to-ship refueling systems, and reliquefaction systems to enable the refueling function.

As informed, the vessel has a fueling capacity of 1,650 cbm of LNG per hour, sufficient to fuel large container ships, duel fuel ore carriers, crude tankers and RORO ships.

Following the vessel’s delivery, the ship is expected to carry out its first bunkering operation shortly.

The conversion is the first project of its kind in China, and it forms part of the country’s national strategy of carbon peaking and achieving carbon neutrality by switching to greener fuels.