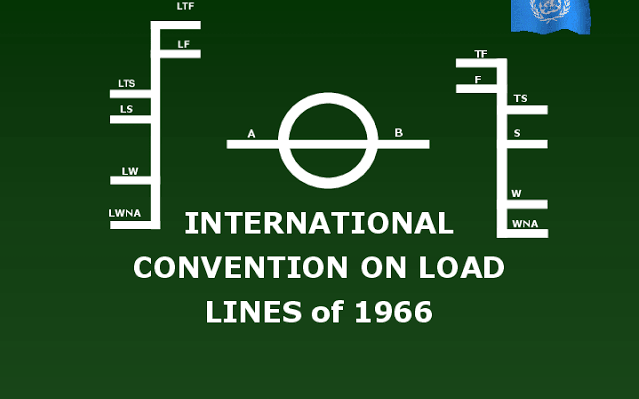 It has long been acknowledge that restrictions on the draught to which a ship may be loaded make a considerable contribution to her safety. These limits are given in the form of freeboards, which constitute, besides external weathertight and watertight integrity, the main objective of the Convention.

The first International Convention on Load Lines(LL), accepted in 1930, was depends on the principle of reserve buoyancy, but, it was acknowledge then that the freeboard must also assure adequate stability & avoid excessive stress on the ship’s hull as a result of overloading.

In 966 Load Lines convention, accepted by the IMO, provisions are made finding the freeboard of ships by subdivision & damage stability calculations.

The regulations considers the potential hazards present in different zones & different seasons. The technical annex consists of several extra safety measures regarding doors, freeing ports, hatchways & other items. The primary purpose of these measures is to assure the watertight integrity of ships’ hulls below the freeboard deck.

All allocated load lines should be marked amidships on each side of the ship, along with the deck line. Ships considered for the transportation of timber deck cargo are allocated a smaller freeboard as the deck cargo gives protection against the effect of waves.

The Convention comprise Annex I, divided into 4 Chapters:

• Chapter II – Conditions of the assignment of free board;

The 1966 Convention allowing for amendments to be made by positive approval. Amendments could be reviewed by the MSC, the IMO Assembly or by the Conference of Governments. Amendments would then only enforced 12 months after being accepted by two-thirds of Contracting Parties. In practice, amendments accepted between 1971 & 1983 never got enough acceptances to enforced. These included:

The Protocol was mainly accepted in order to harmonize the Convention’s survey & certification requirement with those included in SOLAS & MARPOL 73/78.

All 3 instruments need the issuing of certificates to show that conditions have been met & this has to be done by means of the survey which can involve the ship being out of service for several days.

The harmonized system reduce the problems created by survey dates & intervals between surveys which do not tally, so that a ship should no longer have to go into port or repair yard for the survey needed by one Convention shortly after doing the same thing in association with another instrument.

The 1988 Load Lines(LL) Protocol alter some regulations in the technical Annexes to the Load Lines(LL) Convention & begin the tacit amendment procedure. Amendments to the Convention may be reviewed either by the MSC or by a Conference of Parties.

Entry into force: 12 months after being adopted by 2/3 of Contracting Governments.

The modification to Annex B to the 1988 Load Lines(LL) Protocol comprise a number of major changes, in particular to regulations regarding: strength & the intact stability of the ships; definitions; superstructure & the bulkheads; doors; position of the hatchways, doorways & the ventilators; hatchway coamings; hatch covers; machinery space openings; various openings in the freeboard & the superstructure decks; cargo ports & other similar openings; spurling pipes & the cable lockers; side scuttles; windows & the skylights; determination of the freeing ports; protection of the crew & the means of safe passage for the crew; determination of freeboard; sheer; minimum bow height &  the reserve buoyancy; & others.