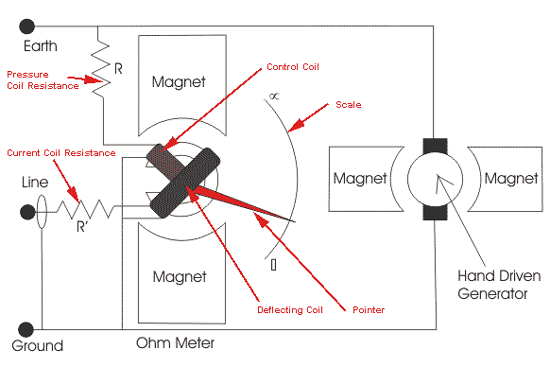 Megger is the most portable insulation tester. It is used to measure very high resistance of the order of Mega ohm.

This can be separated into mainly two categories:-

The coil are rigidly mounted at sight angles to each other. They are attached to the small hand driven generator. The coils move easily in the air gap of a permanent magnet. To protect the coils under short circuit, a limiting resistor connected in series with the coils.

Resistance to be measured is linked across the test terminals i.e. connected in series with deflecting coil and across the generator. When currents are supplied to the coils, then they have torque in opposite directions.

If the resistance to be measured is high, no current will flow through the deflecting coil. The controlling coil will set itself perpendicular to the magnetic axis and hence, set the pointer at infinity.

If the resistance which is to be measured is small, a high current flow through the deflecting coil and the resulting torque sets the pointer to zero.

For intermediary values of resistance, depending upon the torque production, the pointer is set at a point between zero and infinity.

The hand driven generator is a permanent magnet type and it is designed to generate from 500 to 2500 volts.

Shorten the probes together and switch to MΩ the pointer should indicate approximately ‘0’.

Megger is used to measure insulation resistance and other high resistance values, It is also used for ground continuity and short circuit testing of electrical power system. The chief advantage of the megger over an ohmmeter is its capacity to measure resistance with a high potential or breakdown voltage.

Impedence of insulation is very high. A megger is specifically designed to accurately measure high impedences. An ordinary multimeter is designed to measure lower, more finite impedences. Therefore a megger is more accurate for the application.

A insulation tester (multimeter) normally also incorporate a low voltage continuity test facility. This is a low resistance instrument for measuring the continuity of conductors. It should be used to measure the low resistance of cables, motor windings, transformer windings, earthing straps etc. procedure is as follows: