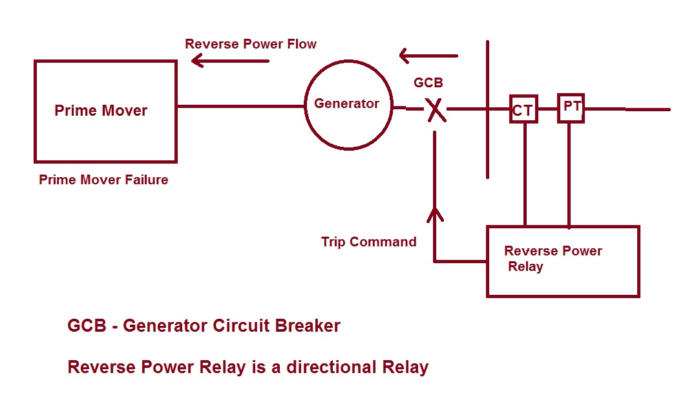 Alternators used for parallel running are required to have a protective device which will release the breaker and prevent motoring if reversal of powering occurs. Such type of device would prevent damage to prime mover which had shut down automatically due to a fault such as loss of oil pressure.

Reversal of current flow cannot be detected with an alternating supply but power reversal can, and protection is provided by a reverse power relay.

The reverse power relay consist of light weight non-magnetic aluminium disc, mounted on a spindle which has slow friction bearings, is positioned in a gap between two electromagnets.

The voltage coil is designed to have high inductance so that current in the coil lags voltage by an angle approaching 90°. Magnetic field produced by the current similarly lags the voltage and also lags the magnetic field of the lower electromagnet. Both fields pass through the aluminium disc and cause eddy currents.

The result of the eddy currents is that a torque is produced in the disc with normal power flow, trip contacts on the disc spindle are open and the disc bears against a stop.

When power reverses, the disc rotates in the other direction, away from the stop, and the contacts are closed so that the breaker trip circuit is energized. A time delay of 5 sec prevents reverse power tripping due to surges at synchronizing. Reverse power setting are 2 to 6% for turbine prime movers and 8 to 15% for diesel engines.