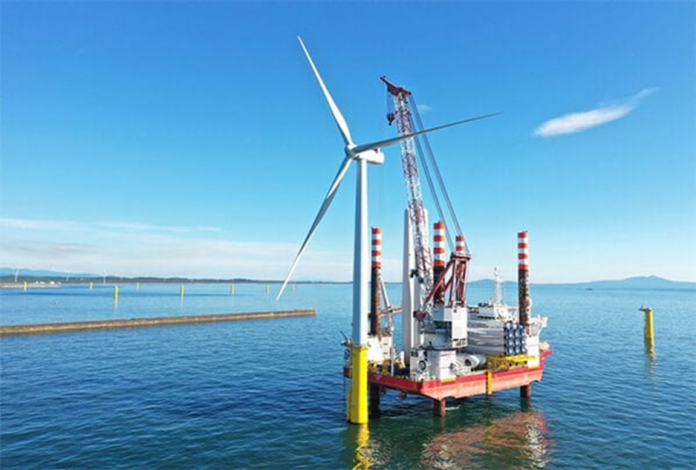 Japan’s first large-scale offshore wind farm went into commercial service on December 22 with a second neighboring site expected to also commence operations shortly. While the projects are small in scale, and near shore, they are seen as a milestone as the country moves forward with plans for its green energy transition.

Japan has increased its goal for offshore wind energy as it looks to expand its use of renewable energy and cut its dependence on coal, which currently accounts for a third of the country’s power source. The government approved its Sixth Energy Strategic Plan in October 2021 raising the goal to a third of its energy from renewable sources by 2030, which has been termed an ambitious policy. The target for wind is 10 GW by 2030 and 30 to 45 GW by 2040.

Marubeni Corporation, which is the largest investor in the Akita Offshore Wind Corporation, announced that the Noshiro Port wind farm has commenced commercial operations. The company reports an investment of approximately $755 million for the development of the two wind farms located approximately 300 miles northwest of Tokyo on the Sea of Japan.

The Noshiro site consists of 20 fixed bottom 4.2 MW wind turbines. Each stands nearly 500 feet with blades that measure approximately 200 feet in length. Near by the company is also developing the Akita Port wind farm. It consists of 13 wind turbines also each rated to produce 4.2 MW of power. In total there are 33 wind turbines and they expect to produce approximately 140 MW of power which will be sold to the Tohoku Electric Power Network under a 20-year agreement. The project also included the construction of an onshore substation and the required transmission lines.

Marubeni called today’s start of commercial operations a major step forward for Japan’s wind energy industry. They noted the company was first selected in February 2015 as the potential main owner of the Akita Prefecture’s wind farms. They established the Akita Offshore Wind Company in 2016, completing the feasibility study and reaching an investment decision for the wind farms at the beginning of 2020.

Installation of the wind turbines was carried out by Seajacks’ Zaratan self-elevating platform. It installed the foundations and wind turbines completing the work in September 2022. Since then, the sites have been undergoing testing and commissioning. The Akita site is currently completing commissioning work and is expected to start operations shortly.

Marubeni, which is one of Japan’s largest trading companies with a large presence in the energy sector, reports it will “take a progressive approach” to expand its renewable energy business. Their goal is to develop experience from these offshore wind projects that can be used to expand the industry.