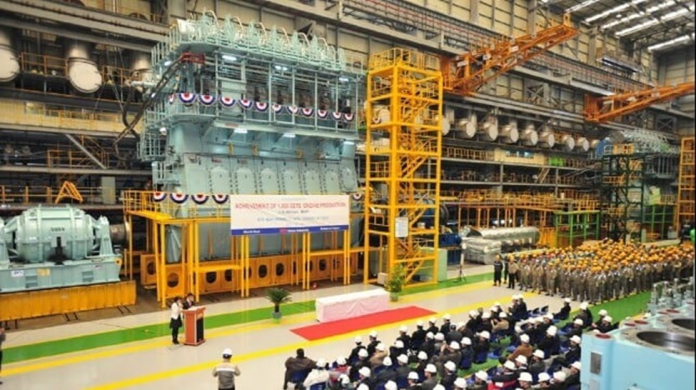 One of the final pieces of the former STX group is going up for sale in South Korea and in a surprise move, Korea Shipbuilding & Offshore Engineering (KSOE) announced that it is among the bidders for the company which is the engine builder of the former conglomerate. After the financial collapse of STX a decade ago, the engine company was acquired by a private equity firm during one of the several restructurings of the former parent company.

Pine Tree Partners acquired a controlling 66 percent stake in the engine manufacturing company known as STX Heavy Industries in 2018, but recently announced its intentions to sell its remaining shares in a tender offer process. They originally acquired their position for $75.1 million and while remaining the largest shareholder, the equity firm has previously sold shares on the open market. Its remaining position, which equals 48.8 percent of the equity of STX Heavy Industries is for sale with the preliminary bids due on December 14.

The Korea Economic Daily reported that KSOE placed a last-minute bid in the process being run by the local office of KPMG. Other bidders are reported as including HSD Engine Co., formerly known as Doosan Engine, and an unidentified overseas company.

According to local media, an executive from Hyundai Heavy Industries Group, the parent company of KSOE, explained that acquiring STX would help to create a synergy effect in the company’s shipbuilding operations. KSOE is reported to have an engine production capacity of 12 million horsepower a year, while STX Heavy Industries reports an annual capacity of 4 million horsepower and can surpass 15 million horsepower in large-scale marine engine production. Securities market data show that between January and September of this year, STX posted $100 million in revenue and $24 million in operating profit.

“We believe that the acquisition will help meet the growing demand for ship engines, and therefore we participated in the preliminary bidding,” a spokesperson for KSOE told the Korea JoonAng Daily. “By combining Hyundai Heavy Industries’ engine technology, we will be able to extend our line-up into small- and mid-sized engines.”

KSOE is reported to be anxious to expand its engine capacity in part due to its large shipbuilding order backlog. KSOE reports it has surpassed its yearly target for 2022 with orders totaling 184 ships, an equivalent of $22.06 billion.

The price of STX’s shares jumped more than 25 percent in value on the Korean stock exchange on Friday on the reports of the bidding. STX Heavy Industries will choose a preferred bidder by February 2023, and after the final bidding, a stock purchase agreement is expected to be completed in the first quarter of the year.