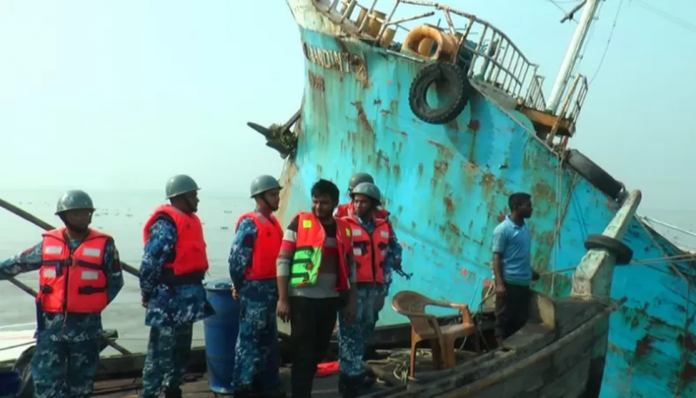 A tanker full of diesel has gone down in Bangladesh’s Meghna river after colliding with another vessel, spilling a large quantity of fuel, according to local media.

In the early hours of Sunday morning, the tanker Sagor Nandini-2 was under way on the Meghna near the district of Bhola when it was in collision with an unnamed vessel in heavy fog, according to the Bangladesh Coast Guard. The tanker sustained hull damage below the waterline, and it went down with about 300,000 gallons of distillate fuel oil on board. All 13 crewmembers were rescued by good samaritans.

According to the Dhaka Tribune, the vessel spilled a substantial part of its cargo, covering the river’s surface in fuel. An estimated 50,000 gallons have been recovered to date, with assistance from local residents who have attempted to collect fuel. The cargo owner, Padma Oil Company, will attempt to recover the remaining fuel in the vessel’s tanks. Two rescue vessels, the Sagar Badhu 3 and Sagar Badhu 4, have been dispatched to assist.

The spill will likely have an effect on local fish populations, District Fisheries Officer Molla Emdadullah told local media. The fisheries office plans to collect and test the catch of local fishermen to determine the impact. One potential species in harm’s way is a large breeding ground for hilsa (ilish), the national fish of Bangladesh and a source of employment for about 400,000 fishermen.

The area of the wreck is a busy thoroughfare for commercial traffic, and Bangladesh Inland Waterway Transportation Authority (BIWTA) plans to light and mark the wreck to assure safety of navigation. The agency does not have its own salvage assets to remove a wreck of this size and will depend upon the commercial salvor’s response.