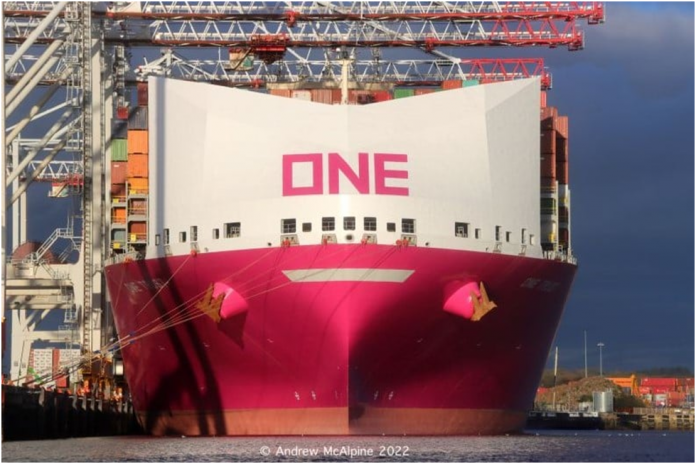 ONE Trust, a 20,170 TEU containership owned by Japanese shipowner Ocean Network Express (ONE), is showcasing an innovative device installed on its bow, a wind deflector.

The device has been installed at Qingdao Beihai shipyard in China during the vessel’s recent drydock.

ONE Trust was built in 2017 by Samsung Heavy Industries, and it was previously known as MOL Trust. The vessel’s market value is $143 million, according to VesselsValue.

The equipment plays the role of a windshield and is aimed at improving the ship’s aerodynamics, and therefore reducing its fuel consumption and its greenhouse gas emissions.

This device is being trialed as part of the shipowner’s energy transition strategy as the company looks at ways of reducing its carbon footprint and meeting environmental regulations set to enter into force.

ONE Trust has already picked up cargo in Southampton and Le Havre and made a call at the Port of Hamburg earlier this morning.

When approached for a comment on the installation, ONE Spokesperson confirmed to Offshore Energy that the company would be installing the device on its future new build vessels as well.

“We will evaluate and consider installing the devices on our existing vessels,” the company added in a statement.

ONE launched its Green Strategy in 2021 which will map out concrete steps toward the decarbonization of the company’s business.

The company has set out to achieve a net zero emissions target by 2050 by covering five focus areas, spanning carbon management, operational efficiency, green investment, alternative fuels and ecosystem building. By 2030, ONE wants to achieve a 70% reduction of Scope 1 emissions per TEU-km from a 2008 baseline.

The shipowner is looking at the gradual replacement of its inefficient fleet with a new generation of green vessels running on alternative fuels. ONE has been exploring the benefits of biofuels since last year, conducting multiple trial voyages. The company consumed 1,300 mt of biofuel between FY21-22 as part of alternative fuel trials. However, the use of biofuel as the main fuel is constrained by supply shortages.

Therefore, ONE is looking at fuels such as ammonia, methanol, and methane as well as LNG as an interim solution.

Besides alternative fuels, ONE is studying the potential of reducing its emissions through carbon capture and storage (CCUS) technologies and the potential installation of the technology onboard its ships. The container shipping major has set targets to obtain approval-in-principle for zero-emission vessels by 2023 and deploy its first alternative fuel ships by 2030, phasing out conventional fuel vessels by 2050.