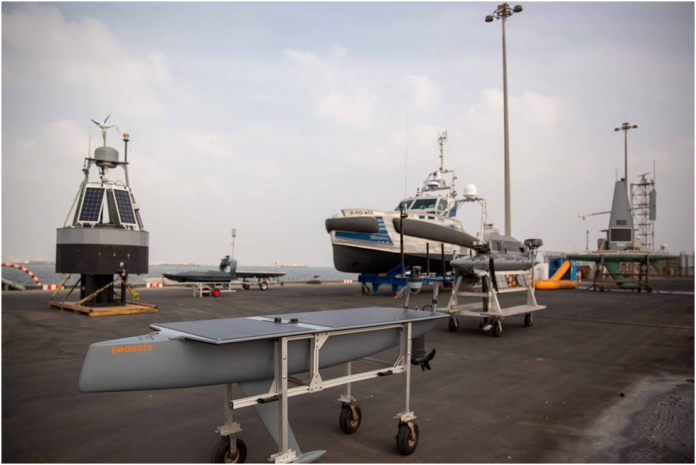 U.S. 5th Fleet began a three-week unmanned and artificial intelligence integration event in Bahrain, Nov. 23, that will involve employing new platforms in the region for the first time.

The event, called Digital Horizon, will advance the command’s efforts to integrate new unmanned technologies while establishing the world’s first unmanned surface vessel fleet by end of next summer. U.S. 5th Fleet’s efforts are focused on improving what U.S. and regional navies are able to see above, on and below the water.

“I am excited about the direction we are headed,” said Vice Adm. Brad Cooper, commander of U.S. Naval Forces Central Command, U.S. 5th Fleet and Combined Maritime Forces. “By harnessing these new unmanned technologies and combining them with artificial intelligence, we will enhance regional maritime security and strengthen deterrence. This benefits everybody.”

Cooper established a staff called Task Force 59 in September 2021 to speed new tech integration across U.S. 5th Fleet. Since its launch, the task force has deployed a suite of new unmanned systems from operational hubs in Bahrain and Aqaba, Jordan.

Digital Horizon will include 17 industry partners bringing 15 different types of unmanned systems, 10 of which will operate with U.S. 5th Fleet for the first time.

Industry partners Accenture Federal Services and Big Bear AI will also employ data integration and artificial intelligence systems during the event, and Silvus Technologies will provide line-of-sight radio communications while an unmanned surface vessel from Ocius participates from off the coast of Western Australia.

“The pace of innovation is amazing,” said Capt. Michael Brasseur, commander of Task Force 59. “We are challenging our industry partners in one of the most difficult operational environments, and they are responding with enhanced capability, fast. I am extremely proud of the entire team, including our many partners across government, academia, and industry for their commitment to Digital Horizon, as we discover new capability together.”

Over the past year, Task Force 59 operated USVs in regional waters for more than 25,000 hours, which equates to 12 years of nine-to-five testing five days a week. The Saildrone Explorer USV in particular has operated at sea for as long as 220 consecutive days without refueling or maintenance.

NAVCENT is headquartered in Manama, Bahrain and includes maritime forces operating in the Arabian Gulf, Gulf of Oman, Red Sea, parts of the Indian Ocean and three critical choke points at the Strait of Hormuz, Suez Canal and Bab al-Mandeb.