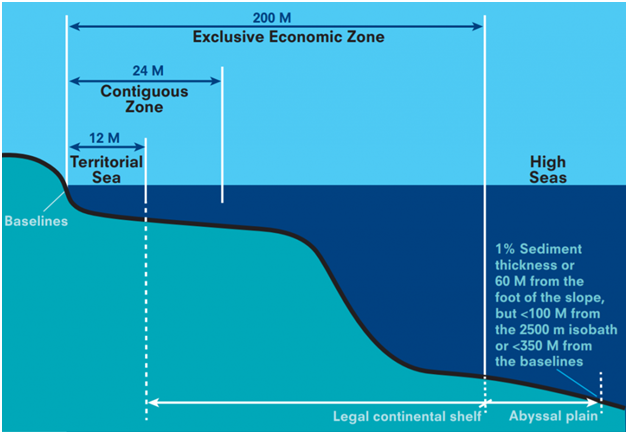 Q. a. What are the important highlights of UNCLOS with respect to environment protection?

b. Briefly explain the following (not more than 100 words)

There are six main sources of ocean pollution addressed in the United Nations Convention on the Law of the Sea :

6. Pollution from or through the atmosphere.

The Convention lays down the fundamental obligation of all states to protect and preserve the marine environment. It further urges all states to cooperate on a global and regional basis in formulating rules and standards and otherwise take measures for the same purpose. Coastal states are empowered to enforce their national standards and anti-pollution measures within their territorial sea. Every coastal state is granted jurisdiction for the protection and preservation of the marine environment of its exclusive economic zones (EEZs). Such jurisdiction allows coastal states to control, prevent and reduce marine pollution from dumping, land-based sources or seabed activities subject to national jurisdiction, or from or through the atmosphere.

With regard to marine pollution from foreign vessels, coastal states can exercise jurisdiction only for the enforcement of laws and regulations adopted in accordance with the Convention or for “generally accepted international rules and standards”. Such rules and standards are adopted through the International Maritime Organization (IMO).

On the other hand, it is the duty of the “flag state” to enforce the rules adopted for the control of marine pollution from vessels, irrespective of where a violation occurs. This serves as a safeguard for the enforcement of international rules, particularly in waters beyond the national jurisdiction of the coastal state, i.e., on the high seas.

Furthermore, the UNCLOS gives enforcement powers to the “port state”, or the state where a ship is destined. In doing so it has incorporated a method developed in other conventions for the enforcement of treaty obligations dealing with shipping standards, marine safety and pollution prevention. The port state can enforce any type of international rule or national regulations adopted in accordance with the Convention or applicable international rules as a condition for the entry of foreign vessels into their ports or internal waters or for a call at their offshore terminals. This has already become a significant factor in the strengthening of international standards.

Finally, as far as the international seabed area is concerned, the International Seabed Authority, through its Council, is given broad discretionary powers to assess the potential environmental impact of a deep seabed mining operation, recommend changes, formulate rules and regulations, establish a monitoring programme and recommend issuance of emergency orders by the council to prevent serious environmental damage.

The territorial sea can be defined as the area which extends up to 12 nautical miles from the baseline of a country’s coastal state. The territorial sea is under the jurisdiction of that particular country; however, foreign ships (both merchant and military) ships are allowed passage through it.

The coastal state can also exercise jurisdiction if

Internal Waters include the coastal areas such as ports, rivers, inlets & other marine spaces landward of the baseline (low-water line) where the port state has jurisdiction to implement domestic regulations. Enforcement measures can be taken for violations of the static standards while in port as well as for the violations that occurred within the coastal state’s maritime zones & beyond. But, foreign vessels are not generally held to non-maritime or security port state laws so long as the activities conducted are not detrimental to the peace & security of the locale.

In the maritime security context, however, a coastal state can avert privately contracted armed security personnel (PCASP) from entering its ports & internal waters if carriage of weapons is forbidden in the national legislation.

Contiguous zone can be defined as the belt which extends 12 nautical miles beyond the territorial sea limit.

A coastal state’s control on this area is limited to prevention of actions which can infringe its customs, fiscal, and immigration laws. It can also act if any activity in the contiguous zone threatens regulations in the territorial sea.

It is possible that vessels carrying noxious dangerous substances or waste may be turned away on public health or environmental grounds.

Exclusive economic zone can be defined as a belt of water which extends up to 200 nautical miles from the baseline of the coastal state. Thus it includes both territorial sea and contiguous zone.

The exclusive economic zone provides the coastal state control over all economic resources such as fishing, mining, oil exploration, and marine research.

The coastal state also has jurisdiction regarding protection and preservation of natural resources and marine environment.

The coastal state has exclusive rights for exploring and exploiting its natural resources in this area. The state also has the exclusive rights to authorize and regulation drilling on the shelf for all purposes.

High seas can be defined as the part of the sea that is not included in the exclusive economic zone, in the territorial sea, or in internal waters of the coastal state or an archipelagic waters (A baseline is drawn between the outermost points of the outermost islands,) of an archipelagic state.

High seas are reserved for the peaceful navigation through international waters. But, regulations have been made to avoid prevention of the slave trade, piracy, seizure of ships, illicit narcotics trafficking & unauthorized broadcasting.