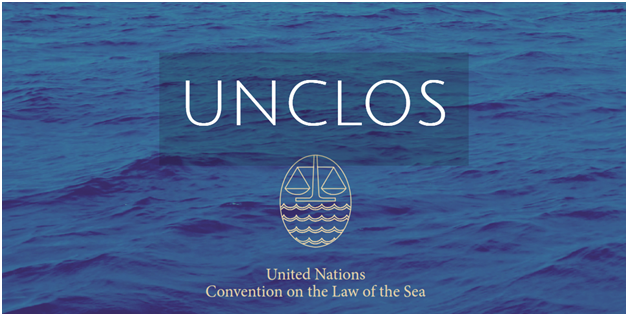 UNCLOS stands for United Nations conventions on laws of sea. It was outcome of the third UN conference in 1982 and came into force internationally on 16th November 1994 UNCLOS provisions concerning ship’s flag and nationality

1. Law of sea convention defines the rights and responsibilities of nations w.r.t their

a. Use of worlds ocean

b. Establishing guidelines for businesses.

3. The treaty document consists of 446 articles grouped under 17 part headings and 9 annexes.

Article 93:- Ships flying the flag of the United Nations, its specialized agencies and the International Atomic Energy Agency

Article 94:- Duties of the flag State

1. Each flag state to effectively exercise its jurisdiction and control in administrative, technical and social matters over ship’s flying its flag.

2. Maintain a register of the ships.

3. Assume jurisdiction under its internal law over each ship flying its flag and its master, officers and crew in respect to administrative, technical and social matters concerning the ship.

4. Take such measures for ships flying its flag as are necessary to ensure safety of sea with regards to:

a. Construction, equipment and sea worthiness of ship

c. Use of signals, the maintenance of communications and preventions of collisions such measures include

5. Each ship is surveyed before & after registration by a qualified surveyor of ships & has on board such charts, nautical publications, navigational equipments & instruments for safe navigation of the ship’

6. Each ship is in charge of master & officers who posses appropriate qualifications in seamanship, navigation, communications & marine engineering and the crew is appropriate in qualification & numbers for the type, size, machinery & equipment of the ship.

8. In taking above measures, each state is required to confirm to normally accepted international regulations, procedures & practices and to take any steps which may be necessary to secure their observance.

9. A state which has clear grounds to believe that proper jurisdiction & control is not exercised by flag state may report to the flag state, upon receiving such report flag state may investigate that matter & if required to take remedial action.

10. Every state must cause an enquiry by a qualified person into every marine casualty/incident of navigation & caused loss of life/damage to other nationals or to a marine environment. The flag state & other states must co-operate in the conduct of the enquiry.

1. States must ensure compliance of international laws such as UNCLOS for the protection of marine environment and must adopt regulations to ensure their compliance to all ships flying its flag.

2. State must take appropriate measures to prevent vessel from sailing unless they are complying with international rules and standards regarding design, construction, equipment and manning.

3. States must ensure that their vessels are carrying onboard all certificates required by as per international requirements and must ensure periodical inspection of ships for compliance.

4. State must provide a investigation when its vessel commits a violation of international rules and regulations.

5. State should enforce its national laws if sufficient evidence is there against its vessel.

6. It should be prompt in responding to any request for information by any other state and it should inform competent international organization about action taken.

7. Flag state must fix adequate penalty for any vessel which violates the law and the penalty must be adequate in severity to discourage future violation.

Duties and obligation of port state:

a. Provide reception facilities for ship in port or terminal, inside and outside port.

b. Inform ships to use the facilities.

e. Reception facility should be adequate in terms of capacity, availability to all ships and without causing undue delays.

a. Maintain a register of local fuel oil suppliers.

b. Require local suppliers to

iii. Inform the organization (company) of all cases where fuel oil suppliers have failed to meet the requirements.