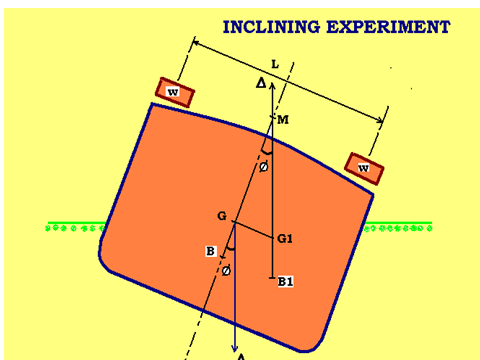 This experiment is carried out on new ships and those that have had large structural alterations  made, to find out the new centre of gravity (kg) and metacentric height (gm)  and further to know the stability of the ship.

Note :  pendulum should be as long as possible, to improve the accuracy of measurement, and a fine wire with heavy bob to ensure free movement. The bob may be immersed in oil or water to dampen it’s movement.

as mass ‘W’ is moved across the deck through a distsnce ‘L’, the centre of gravity of the ship moves from ‘G’ to ‘G1’.

with this ship will be inclined to some angle ‘ǿ’ and will be in stable equilibrium state. The centre of buoyancy will move from ‘B’ to ‘B1’, vertically beneath G1.The movement of ‘GG1’ is parallel to the movement of ‘W’ and therefore angle ‘G1GM’ is right angle.