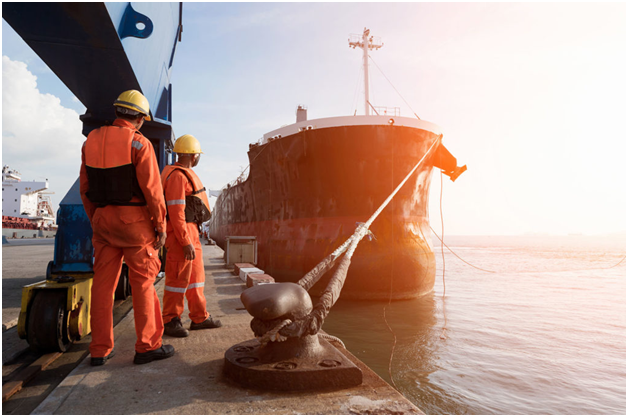 b) Onboard and Onshore complaint procedures

1. Each member of the flag state is responsible for implementation of its own obligations under the convention on ships that fly its flag.

2. Each member state shall establish an effective system for inspection and certification of MLC.

3. In establishing an effective system for inspection and certification of MLC, a member state may authorize (where applicable) public institutions of other organizations which it recognizes as competent and independent to carry out inspections and /or issue certificate.

4. A MLC certificate complimented with DMLC shall provide evidence that ship has been duly inspected.

5. Ships are required to have decent complaint procedures and casualty investigation procedures.

6. Each flag state shall prohibit and penalize any kind of victimization of a seafarer for filing a complaint.

1. Foreign flag ships are subjected to port state inspections for the purpose of reviewing compliance with MLC requirements.

2. PSC inspections that may be carried out under the scope of this convention are to ensure that the working and living conditions for seafarer must meet the requirement of MLC.

3. Similar to flag state PSC shall also accept MLC certificate complemented with DMLC, as evidence that ship is in compliance with regulations.

4. Inspection in a port shall be carried out by authorized officers in accordance with the provisions of the code.

B) Onboard and onshore complaint procedures –

Onboard complaint procedures may be used by the seafarer to lodge complaint relating to any matter that is alleged to constitute a breach of seafarer rights.

1. A complaint should be addressed to the head of the department of the seafarer lodging the complaint or to the superior officer.

2. The HOD or superior officer should attempt to resolve the matter within prescribed time limit according to the seriousness of the issue.

3. If the HOD or superior officer cannot resolve the complaint to the satisfaction of seafarer, the latter may refer to the matter, who should handle the matter personally.

4. Seafarer has right to be accompanied or represented by another seafarer.

5. All complaints and decision should be recorded and a copy to be given to seafarer also.

6. If complaint cannot be resolved onboard, the matter should be referred ashore to the ship manager/owner.

7. In all cases seafarer can file complaint directly to MASTER, SHIP MANAGER/MASTER and COMPETENT AUTHORITY.

2. Authorized officer if possible ill try to promote a resolution of complaint at shipboard level only.

3. If the complaint has not been resolved then officer shall notify the flag state, seeking advice on a corrective action plan.

4. Even after above procedure if the complaint is not resolved, the port state shall transmit a copy of authorized officer to the director general.

Where an authorized officer carrying out inspections finds out that

2. There are clear grounds for believing that the working and living conditions on the ship do not confirm the requirements of the convention.

3. There are reasonable grounds for believing that the ship has changed flag for the purpose of avoiding compliance with this convention.

4. There are complaints alleging that specific working and living conditions onboard are not confirming to the requirements of this convention

5. The conditions onboard are clearly hazardous to the safety, health and well being of sea farer.

3. Qualification/training/certification of seafarer is incomplete or invalid.

4. Medical certificate not valid/medical equipment not onboard.

5. MLC/DMLC-I/DMLC-II not as per convention.

10. Unhygienic living condition on board.

11. Quality and quantity of food and drinking water not suitable for intended voyage.

12. Employment agreement not signed by the seafarer.

The nature of seafarer job limits their opportunity to be ashore and this makes if difficult for them for a proper follow up action for resolving their individual problems. Such problems become grievances in course of time. Such grievances need a quick and effective redressal

For this DG Shipping has started a grievance redressal mechanism for seafarers. This functions as under –

1. Grievance of any seafarer may be filed in DGS, either by post or email to deputy director general (crew branch), Mumbai.

2. Such grievances will be registered and an acknowledgement and registration number shall be assigned within 48 hrs of receipt of grievance.

3. Seafarers can also register their grievance in person with respective MMD offices at Chennai/Mumbai/Goa/Kochi/Noida etc.

4. Such grievances will also be personally heard by the senior officers of DFS once in 3 months at 1500 hrs on 1st Wednesday of Jan, April, July and October every year.

5. The director general / Joint director general of shipping also hear seafarers grievances personally once in a year on 3rd Wednesday of a given month at 1500 hrs in the officially decided MMD office.

6. The decision of the DGS shall be final and binding.