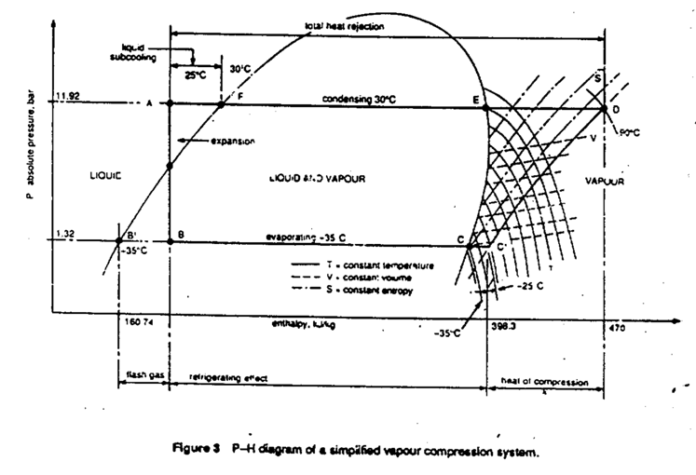 When its volume is reduced by compression, the pressure of a gas becomes high and therefore it is possible to condense easily by cooling water or air of room temperature because this temperature is higher than the refrigerator chamber.

The condenser cools the gas discharged from the compressor and turns it into a liquid. The water-cooling system or air-cooling system is available to cool compressed gas.

The cooled and liquefied refrigerant is stored either in the condenser or the liquid receiver.

Enthalpy- A thermodynamic quantity equal to the total heat content of a system. It is equal to the sum of the internal energy of the system plus the product of pressure and volume.

Pressure- Absolute pressure is zero-referenced against a perfect vacuum, so it is equal to gauge pressure plus atmospheric pressure.

Gauge pressure is zero-referenced in terms of ambient air pressure, so it is equal to absolute pressure minus atmospheric pressure.

specifically : the maximum pressure possible by water vapour at a given temperature.

Entropy – It is a thermodynamic term which indicate the absence of a system thermal energy for conversion into mechanical work, often interpreted as the degree of disorder or randomness in the system.

A p-h diagram (pressure – enthalpy) is a graph with a vertical axis of absolute pressure and a horizontal axis of specific enthalpy. It is an important diagram, used frequently for performance calculation of a refrigerating machine.

The refrigerant exists as a mixture of vapour and liquid under the Saturated Liquid line and Saturated Vapour line.

To the left of the Saturated Liquid line the refrigerant exists as a liquid.

To the right of the Saturated Vapour line the refrigerant exist as a superheated vapour.

On the diagram, the refrigeration cycle is represented by the line 1-2-3-4.

1-2 is where the gas is compressed resulting in rise in pressure and enthalpy, which equals the energy put into the gas by the compressor, all in the superheat region.

2-3 is where the gas is condensed to a liquid.

3-4 is where the vapour is passed through an expansion valve; the pressure is reduced without any enthalpy change.

4-1 is where the liquid is evaporated completely to a gas and where enthalpy is extracted from surroundings. This is the REFRIGERATION or COOLING effect.

The coefficient of performance or COP (sometimes CP or CoP) of a heat pump, refrigerator or air conditioning system is a ratio of useful heating or cooling provided to work required. Higher COPs equate to lower operating costs.

For a refrigeration system a COP of 4 indicates that 1 kW of electricity is needed for a evaporator to extract 4 kW of heat.

A refrigerant is a mixture or substance, normally a fluid, used in a heat pump and refrigeration cycle. In most of the cycles it undergoes phase transitions from a liquid to a gas and back again. Many working fluids has been used for such purposes.

A refrigerant works as a medium to move heat from one place (being cooled) to another place (where this heat is supplied to another medium), while circulating in closed loop of the refrigeration cycle.

Valves, set for less than this, will not operate properly and may flood back liquid refrigerant to the compressor

The superheat setting of most thermostatic expansion valves is adjustable. Remove the seal cap on the valve and turn the adjusting stem with a screwdriver. Turning the stem to the right increases the spring pressure, reducing refrigerant flow and thus increasing superheat. Turning the stem to the left decreases the spring pressure, increasing refrigerant flow and thus reducing superheat. Two turns of the stem will typically change the superheat about 0.5℃.

To add refrigerant to an operating system, proceed as follows:

(1) Measure the weight of a refrigerant bottle by scale.

(2) Hook up the refrigerant bottle backward and prepare the charging pipe.

(4) The bottle is put down. It means that the refrigerant is supplied liquid state.

(5) After making sure that each flare nut is tightened satisfactorily, open the charging valve and stop valve of a refrigerant bottle.

(6) Close the stop valve after the receiver for pump down.

(8) Continue charging until required amount of refrigerant has been charged.

(9) After charging is complete, stop the charging valve and stop valve of a refrigerant bottle.

(10) Disconnect the charging pipe and store a refrigerant bottle.

If the refrigerating system is charged excessively with a refrigerant, the HP pressure rises, and liquid refrigerant is returned to the compressor, when the expansion valve is not properly adjusted, thus not only the suction line but also the compressor are coated with frost. In such a case, the excess refrigerant must be removed. With all refrigeration system valves in their normal operating positions, proceed as follows:

(2) Measure the refrigerant bottle. Place on deck at an angle slightly above horizontal with bottle valves at high end. The position of the bottle should better be lower, if possible, than charging valve.

(3) Connect the stop valve of a refrigerant valve with the charging pipe and purge air.

(5) In this time, the bottle outside is cooled by ice and so on. It makes the lower pressure than condenser.

(6) Close the stop valve of a refrigerant valve and the charge valve, when required amount of refrigerant has been removed.

(7) Disconnect the charging pipe and store a refrigerant bottle.

Air and non-condensable gas, if present in the system, are pumped through the system and discharged by the compressor into the condenser. These gases are trapped in the condenser and cause excessive condensing pressures and the HP gas pressure to become abnormally high.

When adding oil into the compressor, it is important to prevent air and moisture from entering the system.

(1) Connect the charging pipe of LO into the oil-charging valve and supply new oil into an oil pan for exclusive use for refrigerant oil.

(2) Open the oil-charging valve just a crack and purge air in the charging pipe by gas pressure in the compressor.

(4) Close the suction valve and open the delivery valve of the compressor and then start it.

(6) Open the oil-charging valve slowly while checking the oil level and oil is easily supplied into the crankcase of compressor by vacuum.

Proceed as follows to remove oil from a compressor crankcase:

(1) Connect the charging pipe of LO into the oil-charging valve.

(3) Open the oil-drain valve and remove oil by refrigerant gas pressure in the crankcase.

Refrigerant leak detectors contain a halide torch that uses a propane gas flame to detect refrigerants. If halogenated refrigerant vapours are present, the flame changes from blue to a blue-green color. If gas leakage is big, the flame color becomes violet

This detector is controlled by a microprocessor and can detect CFC, HFC, HCFC and also a mixture refrigerant. Leakage can be known by an indicator lamp, meter or sound.