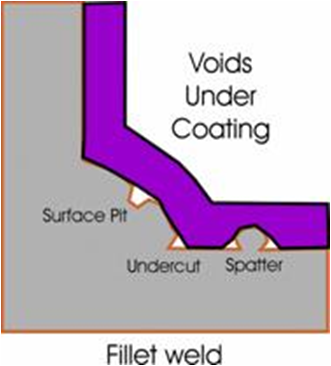 Cleanliness is essential for steel surface to hold coating. Paint will not adhere or bond to steel surface if there is loose rust, oil, grease, dirt, salts, chemicals, dust, etc. are not cleaned from the surface to be coated, adhesion will be compromised and/or osmotic blistering will occur in addition to premature failure of the coating in service.

Any substance which prevents the coating from adhering directly to the steel can be considered a contaminant. Major contaminants at new building include:

A jet of the abrasive is swept across the surface of the steel rather than being focussed on one area for any period of time. Its effectiveness based upon the type and particle size of the abrasive used, the condition of the surface and the skill of the operator. Three major types of sweep blast are commonly used:

Advantages of hydroblasting are:

Disadvantages of hydroblasting are:

Pickling: It is an acid pickling process can be used for the preparation of small items before coating. The items, such as pipes, are cleaned by alkali followed by a wash and then an acid pickling bath to remove rust. Through washing should take place to remove all the acid, particularly if the item is to be painted.

The given standards are used for judging the surface cleanliness of steel are based on visual observations only and are all assessed relative to the original condition of the substrate prior to cleaning. Steel is usually categorized into four grades – A, B, C and D grade, where A grade is in the least corroded condition.

When seen without magnification, the surface shall be free from visible oil, grease and dirt and shall be free from millscale, rust, paint coatings and foreign matter. Any traces of contamination will show only as slight stains in the form of spots or stripes.

When seen without magnification, the surface shall be free from visible oil, grease and dirt and from most of the millscale, rust, paint coatings and foreign matter. Any residual contamination shall be firmly adhering.

When seen without magnifying, the surface shall be free from visible oil, grease and dirt and from poorly adhering millscale, rust, paint coatings and foreign matter.

bottom: a coat of 50 micron