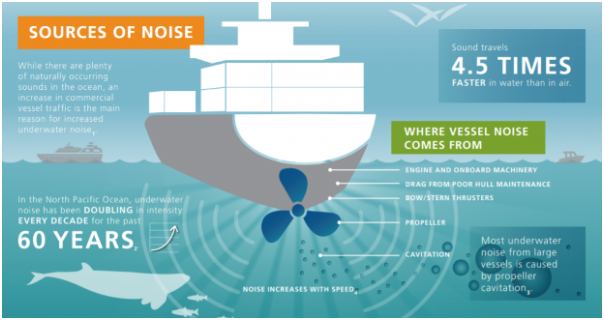 Q. Referring to the latest IMO “ Code on Noise Level onboard Ships”, define and explain the following terms:-

A). A- weighted equivalent sound level

Regulation II-1/3-12 of (SOLAS), 1974, as amended, adopted by resolution MSC.338(91), concerning protection against noise, provides that ships shall be constructed to reduce onboard noise and to protect personnel from noise in compliance with the Code on noise levels on board the ships. Required to establish mandatory noise level limits for the machinery spaces, control rooms, workshops, accommodation & other spaces on board ships. Code is in effect from 1st July 2014

Requirements & recommendations in the code are made for:

1. Measurements of the noise levels & exposure;

2. Saving the seafarer from the risk of the noise-induced hearing loss under conditions where at present it is not practicable to limit the noise to a level which is not potentially harmful;

3. Limits on the acceptable maximum noise levels for all spaces to which seafarers generally have access; &

4. Verification of the acoustic insulation between the accommodation spaces.

C-weighted sound pressure level of the continuous steady sound that within a calculated time interval, T, has the same mean square sound pressure as a sound under consideration which varies with the time.

Sound pressure level expressed in decibel (dB), of a sound or noise given by the following equation