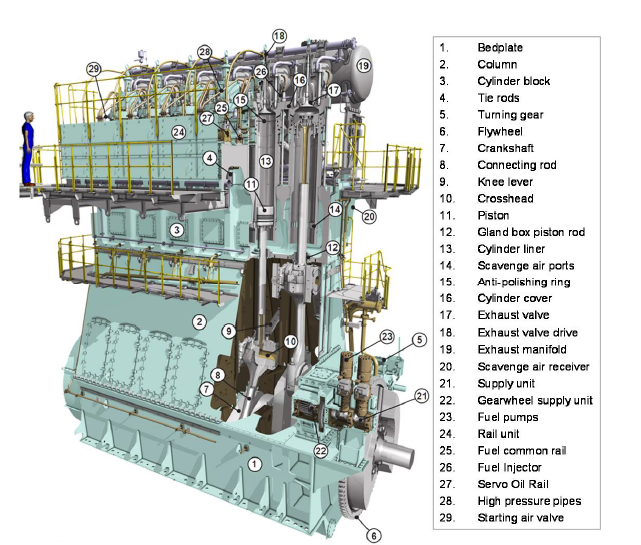 The prime mover of merchant ships has been for more than the century primarily the marine Diesel engine, which is nowadays predominantly a low-speed, two-stroke, crosshead-type, reversible, uniflow-scavenged, turbocharged, electronically controlled engine. The low speed marine engine is, due to its size, the most efficient thermal machine &, due to its fewer cylinders & consequently fewer moving parts, particularly reliable. The two-stroke cycle is applied to maximise the powerto-weight ratio, minimise engine size and for reversibility.

Due to the low speed needed & the finite maximum piston speed achievable, the marine engine having a very high stroke-to-bore ratio, which in turn is the primary reason for the crosshead design & the uniflow scavenging concept. Due to the two-stroke concept & the typically long stroke, the marine Diesel engine is invariably turbocharged. Finally, the demand for the flexible engine tuning, optimised throughout the load range directs the use of electronic engine control.

The market requirements for the 2-stroke marine Diesel Engine differ enormously from the engines in other segments of the marine & automotive industries. The engine designer is required to correctly select the power output at the correct speed, since the engine is directly connected to the propeller without the gearbox. This attribute of the low speed engine, added to the low production volumes characteristic of merchant shipbuilding market, makes the low-speed engine a highly customised product, tailor made for each application.

The purpose of this paper is to give an overview of the development of the modern low-speed two-stroke marine Diesel engine from the engine designer’s(Winterthur Gas & Diesel, WinGD) point of view starting from the market requirements for power & speed, with insights & design choices that are relevant for the whole industry. A presentation will be made of:

Particular centre will be placed on the trade-off off in terms of reliability, cost, manufacturability & serviceability of the engine that the engine designer (licensor2) is challenged with in order to make a competitive product for his customers, which are obviously shipowners, but also engine makers (licensees) and shipyards. Additionally, the tools and methods that the engine designer of the modern two-stroke engine has at his disposal will be described in the context of the development process.