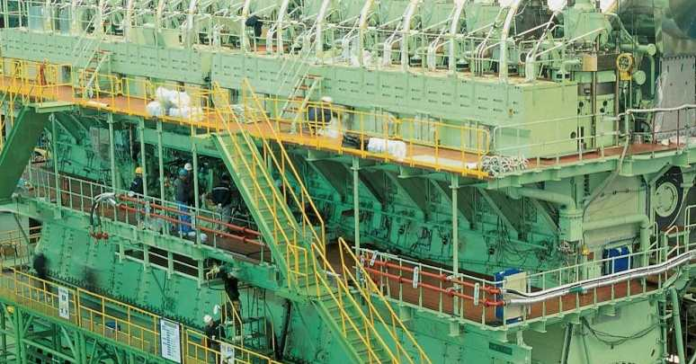 The most important market requirements for the marine Diesel engines, which shape the basic engine design, are the following:

Engine Power: The fundamental requirement in order to propel certain vessel at a certain speed is engine power

Engine speed: Required engine speeds are very low in contrast to the other segments in order to optimise propulsion efficiency with propellers as large as allowable by the vessel design. To attain these low speeds, ranging 1-2 Hz, the engine designer chooses high stroke-to-bore ratios

Engine footprint: The engine footprint refers mainly to the engine base and the Piston Dismantling Height (PDH). Slim engines can be fitted far back into the vessel hull & lower PDH accounts for lower engine room height; both characteristics optimising cargo capacity

The 2-stroke engine basic characteristic, which is derived directly from the market requirements (power & speed), is the layout field. The layout field is defined by the four straight lines(on a power-speed diagram with loglog scales) which constitute the major design limitations as shown in figure & described below:

The stroke-to-bore ratio is the basic parameter that is derived from the layout field and determines the engine’s main dimensions. Normally, a trend towards increasing stroke-to-bore ratios & mean piston speed, required to optimise propulsion efficiency with minimised propeller speeds, can be observed throughout the last decades, as shown in Figure below:

This trend leads, in principle, above a certain stroke-tobore ratio, to a compromise in Specific Fuel Consumption (SFC) due to the increasing scavenging(throttling), friction (e.g. piston rings) & heat losses(due to higher surface to volume ratio). But, this tendency for the increased SFC has been more than compensated on the engine side by a steady increase in Maximum cylinder Pressure (MCP) & MEP, which can be observed throughout the past 60 years.