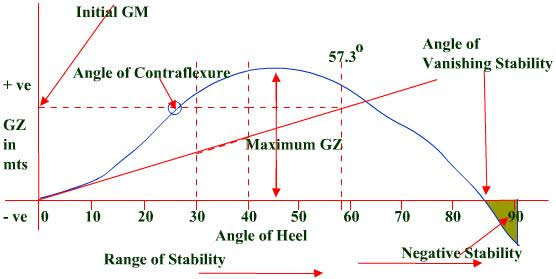 The study of damaged stability of the surface ship comes of use when the ship‘s watertight hull is damaged in a way that enable water to flood any compartment within the ship‘s hull. Since this changes the stability parameters of the ship, the extent of which depends on the extent of damage and flooding, it is studied separately from intact stability.

Change of Draft: Flooding results in entry of water into the ship‘s damaged compartment. This will cause a change in draft to the point where the displacement of the undamaged (intact) part of the ship will be equal to the displacement before damage less the weight of the water that entered the ship after flooding. To express it:

Change of Trim: Ingress of water in a compartment can be considered as an addition of weight to any point along the length of the ship. This causes a change in the trim of the ship.

Change in Stability: The metacentric height of the ship changes due to flooding. This can be explained by the general expression of metacentric height: The explanation of reduction in stability can be done in two ways, which is exactly what we will study in this article, but at a later stage. For now, it should suffice to understand that when a ship is flooded, it results in a change of KB and BM values. The KB rises due to flooding, and it may rise further due to change in the ship‘s trim. However, there is a significant reduction in BM, which is a function of the area moment of the ship‘s water plane. Why? We will look into that when we study the Lost Buoyancy Analysis.

Change in Freeboard: The increase in draft of the flooded ship results in reduction of freeboard, which poses a great threat to the residual buoyancy of the ship. Even though the metacentric height may be positive after flooding, reduction in freeboard to a point where the deck is immersed, decreases the ship‘s range of stability. This means that the ship could now capsize due to external forces of wind or waves.

One of the most common terms that is used in damaged condition of a ship, is Margin Line. The Margin Line of a ship is an imaginary waterline considered 75 mm below the uppermost continuous watertight deck. If a ship is damaged, it is considered to be safe only if the margin line is not immersed. Once the waterline reaches the margin line at any point along the length of the ship, the ship is considered to be unsafe, and evacuation becomes mandatory.

Figure 1: Reduced GM due to damage to a ship. The reduction in metacentric height due to damage can be extrapolated to the stability curve as a decrease in height of the GZ curve & range of stability, as shown in the figure above. So if the loss in metacentric height is such that the remaining maximum righting lever (GZ) is less than the heeling moment, the ship will capsize. It is therefore, the designers work to:

1. Design the subdivision in such a way that the remaining righting arm is sufficient upto a certain level of damage.

2. To identify the extent of damage that can be considered safe for the ship.