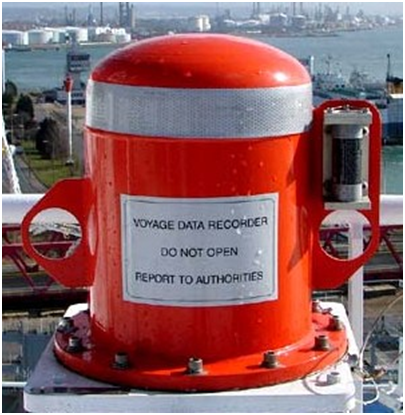 Passenger ships & the ships other than passenger ships of 3000 GT & more built on or after 1st July 2002 must carry voyage data recorders (VDRs) to help in accident investigations, under regulations accepted in 2000, which enforced on 1st July 2002.

The mandatory regulations are contained in chapter V on Safety of Navigation of the International Convention for the Safety of Life at Sea, 1974 (SOLAS).

Like the black boxes installed on aircraft, voyage data recorders(VDRs) allow accident investigators to review course of action & instructions in the moments before an incident & help to identify the cause of any accident.

In regulation 20 of SOLAS chapter V on VDR, the following ships are instructed to carry VDRs:

VDRs are needed to meet performance levels not inferior to those accepted by the Organization.

Performance standards for VDRs were accepted in 1997 & give details on data to be recorded & VDR details. They state that the VDR should continuously keep records of preselected data items associated to status & output of the ship’s equipment & command & control of the ship. The VDR should be fitted in a protective capsule that is brightly coloured & fitted with an suitable device to aid location. It should be completely automatic in normal operation.

Authoritied may exempt ships, other than ro-ro passenger ships, built before 1st July 2002, from being installed with a VDR where it can be reveal that interfacing a VDR with the existing equipment on the ship is unreasonable & impracticable.

The VDR system, including all sensors, will be subjected to an annual performance test. The test will be performed by an approved testing or servicing facility to verify the accuracy, duration & recoverability of the recorded data. In addition, tests & inspections will be performed to find the serviceability of all protective enclosures & devices fitted to support location. A duplicate copy of a the certificate of compliance provided by the testing facility, stating the date of compliance & the applicable working standards, will be kept on board the ship.

The Maritime Safety Committee(MSC) at its 79th session in Dec. 2004 accepted amendments to regulation 20 of SOLAS chapter V on a phased-in transportation instructions for a ship borne simplified voyage data recorder (S-VDR). The amendment entered into force on 1 July 2006.

The S-VDR is not required to store the same level of detailed data as a standard VDR, but nonetheless should maintain a store, in a secure and retrievable form, of information regarding the position, movement, physical status, command & control of the vessel over the period leading up to & following an incident.

The phase-in is as follows:

To help in fatality inspection, cargo ships, when active on international voyages, will be installed with a VDR which may be a simplified voyage data recorder (S VDR) as follows:

Authorities may excuse cargo ships from the application of the requirements when such ships shall be taken permanently out of service within 2 years after the enforcement date specified above.