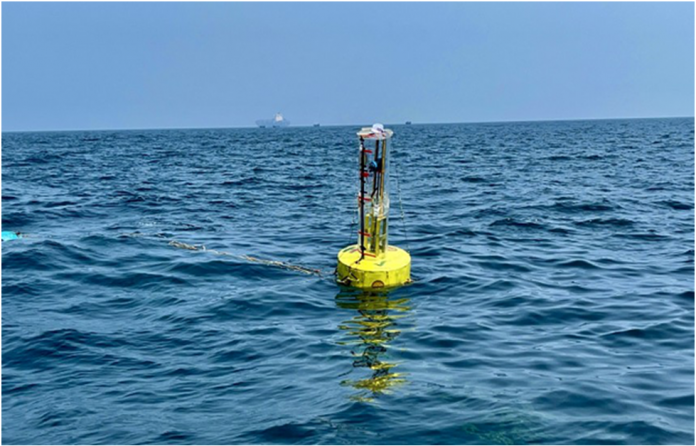 The researchers of the Indian Institute of Technology Madras (IIT Madras) and their partners have completed tests of a wave energy device in the Bay of Bengal, offshore southern India.

The tests were completed during the second week of November 2022 off the coast of Thoothukudi, formerly Tuticorin, in southern India’s state of Tamil Nadu.

According to IIT Madras, the device is expected to be able to generate 1MW of electricity from ocean waves in the next three years.

The device has been named ‘Sindhuja-I’ which, translated from Hindi, means ‘generated from the ocean’.

The system consists of a floating buoy, a spar, and an electrical module. The buoy moves up and down in accordance with the waves. A buoy has a central hole that allows a long rod, called a spar, to pass through it.

The spar can be fixed to the seabed, and passing waves will not affect it, according to IIT Madras, and the device produces power by exploiting the relative motion between the spar and the buoy.

In the current design of IIT Madras, the spar floats and a mooring chain keep the system in place.

According to the institute, the device will be used primarily to generate electricity for the specific remote offshore locations such as oil and gas, defense and security outposts and communication sectors.

The project marks an important step in fulfilling several objectives such as the UN Decade of Ocean Science for Sustainable Development goals, as well as in helping India meet its climate change-related target of generating 500W of electricity by 2030 from renewable energy sources.

It has been carried out under the guidance of IIT Madras lead researcher Abdus Samad, who has a decade of experience working on wave energy.

After he established the Wave Energy and Fluids Engineering Laboratory (WEFEL) at the institute, his team designed and tested a scaled-down model. The institute’s laboratory has also set its sights on researching other applications of this technology such as generating power for ocean like navigational buoys and data buoys, among others.

Stressing the importance of the project, Samad said: “India has a 7,500 km long coastline capable of producing 54GW of power, satisfying a substantial amount of the country’s energy requirement. Seawater stores tidal, wave and Ocean thermal energy. Among them, the harnessing of 40GW wave energy is possible in India.

“Even single devices in different locations along the Indian coastline can generate large quantities of clean power. We are also contemplating placing multiple devices in an array configuration for maximum wave power extraction from the location. Our vision is to make India sustainable by tapping the marine energy and net zero carbon emission to mitigate climate impact.”