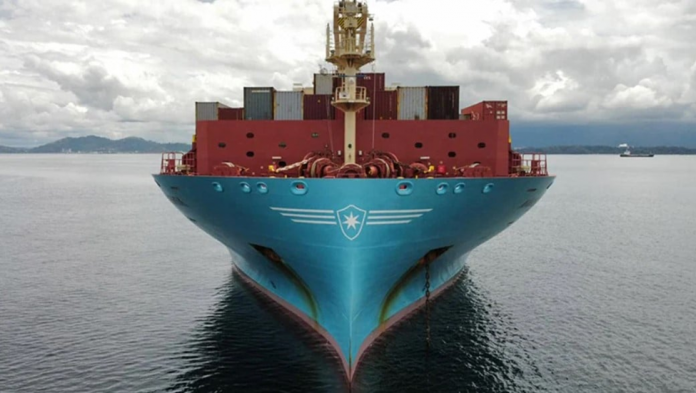 Container shipping major Maersk has launched the construction of its 16,200 TEU dual-fuel containerships that can run on green methanol.

Namely, South Korean shipbuilder Hyundai Heavy Industries hosted a steel-cutting ceremony for what is believed to be the first vessel from the series on November 28, 2022, based on a social media update from Maersk.

The steel-cutting ceremony was attended by the representatives from HHI, Maersk and ABS, which will be in charge of classing the vessel.

“This marks the turning point where the project moves from design into reality and we look forward to continuing the good cooperation with Hyundai Heavy Industries Co., Ltd. Production will progress fast from this point and the next key stage, factory approval test of the main engine, is expected in Spring 2023,” Kristian Agdrup, Lead Naval Architect A.P- Moller – Maersk, said during the steel cut ceremony at HHI yard.

Maersk has a total of 19 methanol-powered container carriers on order at Hyundai Heavy Industries and Hyundai Mipo Dockyard. These include six vessels with a nominal capacity of 17,000 TEU ordered last October, twelve 16,000 TEU boxships and one feeder ordered in 2021. The dual-fuel vessels will be capable of burning methanol as well as conventional low sulphur fuel.

The container shipping heavyweight said that when all 19 vessels on order are deployed and have replaced older vessels, they will generate annual CO2 emissions savings of around 2.3 million tonnes.

That being said, the ships will require approximately 750.000 tonnes of green methanol, according to Maersk, which has been on a massive partnership-building campaign over the past couple of years aimed at securing the supply of green methanol for its ships.

The company has signed eight supply deals with partners across the globe, the most recent one being agreed with US-based SunGas Renewables, Inc., a spin-out of GTI Energy.

The Danish container shipping major has set ambitious 2030 targets as part of its 2040 decarbonization strategy that includes having at least a quarter of its ocean cargo transported with green fuels. Namely, the company aims to cut its emission intensity in the ocean space by 50% when compared to the 2020 baseline. This includes having at least 25 percent of ocean cargo transported with green fuels.

To achieve these targets Maersk plans to invest in fuel efficiency improvements including technical management, network execution, and network optimization as well as transitioning into green fuels by investing in green vessels and potentially retrofiting selected existing vessels.

The company has identified green methanol as the best fuel option for the company’s decarbonization strategy since methanol engine technology is available and proven in operation, the fuel is relatively easy to handle and safety challenges are manageable.

What is more, methanol is biodegradable which is another advantage in cases of fuel spills as it would not be harmful to the marine environment.

Maersk is looking into the potential of ammonia as one of the future fuels in decarbonizing the shipping industry together with biodiesel, and liquid hydrogen. However, due to numerous handling and technological challenges adoption of these fuels is not expected until the end of this decade.

The company is marking the ship construction milestone as it embarks upon a new chapter without the main figure who led the company’s transformation from a diversified conglomerate to an integrated logistics company.

Specifically, the CEO of Maersk Soren Skou announced earlier this month that he would be retiring at the end of the year. Vincent Clerc, currently CEO of the company’s Ocean & Logistic business, will succeed as CEO of Maersk effective 1 January 2023.