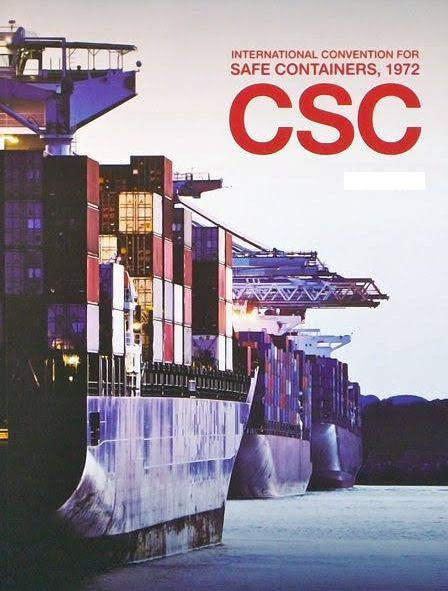 The rapid increase since the 1950s in the use of freight containers for the consignment of goods by sea and the development of specialized container ships, leading the International Maritime Organization (IMO), in 1967, to study the safety of containerization in marine transportation.

In 1972, a conference jointly convened by the United Nations and IMO was held to consider a draft convention prepared by IMO in cooperation with the Economic Commission for Europe.

The 1972 Convention for Safe Containers (CSC 1972) adopted by that conference has two goals: one is to maintain a high level of safety of human life in the transport and handling of containers by providing generally acceptable test procedures and related strength requirements which have proven adequate over the years; the other is to facilitate the international transport of containers by providing regular international safety regulations, equally relevant to all modes of surface transport. In this way, proliferation of divergent national safety regulations can be avoided.

The prerequisite of CSC 1972 applies to the vast majority of freight containers used internationally, except those designed specifically for carriage by air. As it was not intended that all containers, vans or reusable packing boxes should be affected, the scope of the Convention is limited to containers of a prescribed minimum size having corner fittings.

CSC 1972 sets out methods by which containers used in international transport should be approved for the safety by the Administration of a Contracting Party or by an organization acting on its behalf. The Administration, or an organization authorized by it, will then authorize the manufacturer to affix a Safety Approval Plate containing the relevant technical data onto approved containers.

The approval indicated by the Safety Approval Plate allowed by one Contracting Party should be recognized by other Contracting Parties. This principle of reciprocal acceptance of approved containers constitutes the cornerstone of the Convention. Once approved and plated, containers are expected to move in international transport with the minimum of safety control formalities. The subsequent maintenance of a container approved for safety is the responsibility of the owner, who is required to have the container periodically examined.

The technical annexes to CSC 1972 specify that the container should be subjected to various tests, which represent a combination of safety requirements of both the inland and maritime modes of transport. Flexibility is comprised into the Convention by the provision of simplified modification procedures for the technical annexes.

CSC 1972 was modified in 1981 to provide provisional arrangements for plating of existing containers (which had to be completed by 1 January 1985) & for the marking of the date of the container’s next examination by 1st Jan. 1987.

In 1991, modification were accepted to annex I to stop containers being marked with confusing maximum gross weight information, to ensure removal of the Safety Approval Plate when void for any reason & to provide for the approval of modified containers. Amendments to annex II clarified certain test provisions. The 1991 amendments entered into force on 1 January 1993.

Amendments to the Convention accepted by resolution MSC.310(88) enforced on 1st Jan. 2012 & comprise new description concerning Safety Approval Plates, describing the validity of, & elements to be included in, approved examination programmes; a new test for containers being approved for operation with one door removed; and the addition of a new annex III on control & verification.  Annex III came up with specific control actions for the approved officers to evaluate the unity of structurally sensitive components of containers & to decide whether a container is safe to continue in carriage or whether it should be stopped until remedial action has been taken.

The modification to the Convention accepted by resolution MSC.355(92) enforced on 1st July 2014 & include new definitions at the beginning of annexes I & II, along with associated amendments to asure uniform usage of terminology throughout CSC 1972; amendments to align all physical dimensions and units to the S.I. system; the introduction of a transitional period for marking containers with restricted stacking capacity; and the inclusion in annex III of the list of deficiencies which do not require an immediate unavailable decision by the control officer but do need extra safety actions to enable safe ongoing transport.  These new amendments incorporate many elements of the 1993 amendments and although they are not identical to the 1993 amendments, in practice they have the same effect.