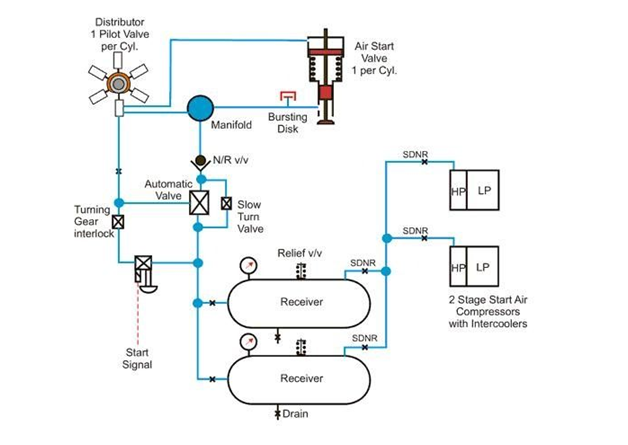 Starting air line explosions occur during the start sequence, when the oil, which can accumulate in the air start receivers or on the surface of the start air lines, becomes entrained with high pressure air in the air start manifold & ignited.

The source of the ignition for these explosions can be attributed to one of the following reason:

To minimise the risk of the explosions, the oil carry over from the compressor should be reduced to minimum. Class regulations require that the air compressor’s air intakes are located in an oil-free atmosphere, & a drain/filter for intercepting oil or water mist is installed between the compressor discharge and air receiver. There must be complete separation of compressor discharge & starting air supply to engines at the receiver which is installed with a drain & a relief valve.

The air start system must be protected with a non return valve at the starting air supply to each engine. This is generally part of the automatic valve which opens when an air start is initiated

In addition to this IACS require that:

Although not part of the IACS regulations, a relief valve may be installed to the manifold where flame arrestors are used instead of the bursting discs.

Unsatisfactory practices which have led to explosions in the air start system include:

The flame trap is manufactured from the brass or the aluminium alloy which both have a high specific heat capacity. So many holes are bored through the thick circular form to enable the air to pass through it. They are installed in the main air line immediately before the air start valve to restrict the risk of a flame in the cylinder propagating back to the main air start manifold, by dissipating the heat energy in the flame.

The safety cap consists of a bursting disk enclosed by the perforated cylinder & a perforated cover in order to protect any bystanders, in the event of a burst. The cover is installed with a tell tale, which shows if the bursting disc has been damaged. If the bursting disc of the safety cap is damaged due to the excessive pressure in the starting air line, overhaul or replace the starting valve which caused the burst, & mount a new disk

If a new disk is not available, or cannot be fitted immediately, then the cover can be turned in relation to the perforated cylinder, in order to reduce the leakage of the starting air.