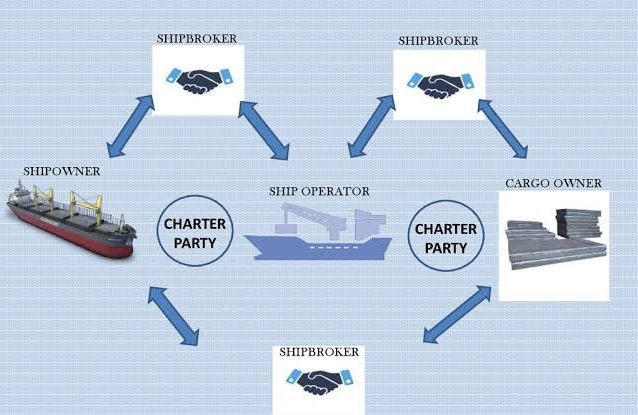 A charter party is a document of contract by which the shipowner agrees to lease, & the charterer agrees to hire, a ship or all the cargo space, or a part of it, on terms & conditions set forth in the charter party. If allowed to do so by the terms of charter party, the may enter into subcontracts with other shippers.

The main types of charter parties are  the Bareboat Charter Party (sometimes called as Demise Charter).

If your vessel is chartered it is importance that you read the charter party carefully, specially the added clauses, until it is completely understood. It is recommended to have the officers read it as a matter of information & instruction & it will do no harm to discuss it with them, specially with the chief officer. The important clauses should be check marked for quick understanding. If any refer to dates of the notice of the ETA to consignee or charterer’s agent, make a note of the day the message is to be sent & be sure to send it.

By this type of charter, the shipowner rent his entire ships & the charterer has the accountability of operating it as though it were his own ships. As the implies, the bare ship is chartered. The shipowner has, for the period covered by the charter party, lost control of his ships.

The charterer pays all payments: fuel, stores, provisions, harbour dues, pilotage, etc. & hire & pays the crew. There may be a clause in the charter party that the master & the chief engineer should be approved by the ship owner.

The charterer is accountable for the maintenance, preservation & safety of the ship. Before delivery to the charterer the ship is surveyed by the representatives of both parties & the same is done on redelivery. The charter party will specify that the must be redelivered in the same good order & condition as when delivered, ordinary wear & tear accepted.

On redelivery the owner’s representatives, generally the port captain & port engineer, may check the logbooks for information concerning to groundings, striking objects & collisions. Fuel oil in the vessel on delivery is paid for by the charterer at the current price at the port at that time, & on redelivery, the ship owner pays for the fuel in the ship at the current price in the port at the time.

This is a charter party for the transportation of a full cargo, not for a period of time, but at a specified rate per ton, for one voyage only, between named ports to be named on arrival in a given area. It is a often used charter party of which there are many types, & most commodities & trades have a certain type to suit their purposes.

Transporters of large quantities of bulk cargo such as phosphate, coal, grain, etc., have charter parties with special names such as “Fosfo”, “Americanized Welch Coal Charter Party”, “Baltimore Grain Charter Party”, etc. In a voyage charter party the charterer takes no accountability for the operation of the ship but usually pays stevedoring payments in & out.

A statement to that effect will be covered in the charter party. The master is generally concerned with voyage charter parties because of the laytime, dispatch & demurrage clauses & the requirement of tendering the Notice of Readiness to load or discharge. In this type of charter the charterer contracts to furnish the cargo at given rate per day. The charter is usually for the bulk cargo, specified in tons or cubic feet, for all or part of the carrying capacity of the ship.