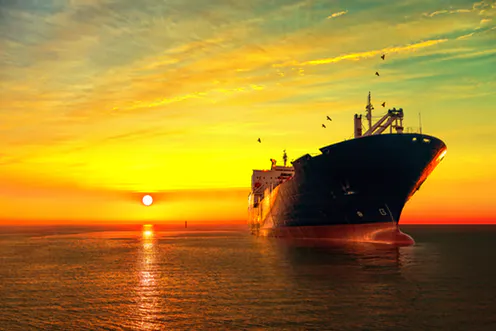 MAN Diesel has discussed the future of state-of-the-art emission control technologies for the new as well as for existing engines with the various authorities. MAN Diesel has highlighted the potential technical concerns & possibilities in order to assist them in developing their proposals for the new emissions regulations.

MAN Diesel believes that the target should be the introduction of the international regulations on emissions. The regulations should be adopted for the worldwide trading & have internationally-approved special areas, such as ECA (emission control area) & SECA, where inland waters & the environment call for further regulation, as is already seen with SECA in the Baltic Sea & North Sea in Europe today. Moreover, it is very important that the regulations do not order which emission control methods should be used, but only specify the emission levels to be met.

The goal of our research is that internal techniques like EGR, WFE, SAM and/or combinations of these will make our two-stroke engines ready for the current & future IMO regulations with regard to the NOx, without using SCR with agents such as urea or ammonia. Compared with SCR, which for many years has been regarded the optimum solution for the NOx reduction, the new methods have significant advantages that need to be further investigated & matured for the market.

The SCR system is best suited for steady high-load conditions with limited use of sulphur in and fuel oil under defined conditions. Moreover, SCR is suited for situations where practically all NOx has to be removed. SCR is less suited for the low-load operation & manoeuvring in costal & harbour areas.

The emissions regulations in Annex VI of the MARPOL 73/78 have now been enforced since 19 May 2005, retroactive for engines from 1 January 2000, referred to as the Tier I level.

The regulations are of vital interest to the customers when discussing new ship and engine orders to be delivered in the relevant time frame.

The decisions on the new limits and regulations have been finalised at the BLG (Bulk, Liquid and Gas) meeting and been approved at the MEPC (Marine Environment Protection Committee) meeting. The scenario and the decisions are outlined in the following.

Moreover, a regulation for the existing pre-year 2000 engines will be developed, since the contribution of the emissions from these engines will exist for still many years to come. The NOx limit level for these engines will be consistent to the Tier I level for new engines as of today. It is anticipated that the certification procedures and the technical documentation needed will be somewhat reduced in comparison to the requirements to new engines in order to make the regulation practicably possible.

With regard to SOx and PM regulations, this is to be controlled by a limitation in the sulphur content of the fuel used. An alternative measure is the use of scrubbers, see Table

How to meet Tier II

All relevant new engines can be updated by the internal methods to meet Tier II.

On MC/MC-C engines, this can be accomplished by introducing new fuel system components like plunger or barrel & fuel valve nozzles, & by an adjustment of the combustion chamber volume by piston rod shims, the scavenge air pressure & the exhaust cam profile. On the ME engines, the fuel pressure booster & fuel valve nozzle, combustion chamber volume by piston rod shims, scavenge air pressure & electronic control parameter settings can be regulated. Moreover, Inconel cladding & Nimonic exhaust valves will most likely to be installed on some engine types in connection with the Tier II optimisation.

When discussing exhaust gas emissions from the ships, it is understandable that focus is on the engine’s funnel. The power required to move the ship at a certain speed is the sum of the hull design & resistance, & the loading of the ship. With the different ship design, or utilisation of a waste heat recovery system, a substantial decrease in emissions can be gained. For the large LNG carrier market coming up, using the ME-GI engine is another possibility for reducing the exhaust gas emissions.

Reducing the emission level is not confined to the engine only.

Another possibility is to regulate the ship speed. For example, emissions are lowered by  about 20% by reducing the speed by 10%. This option could be used close to shore.

In future, we anticipate that the fuels used close to shore will be with a reduced sulphur content. The process to change between different fuel types is standard when a ship goes for a repair involving the fuel system or is laid up for the longer period. SECA areas have already been introduced by the IMO & the EU, & low-sulphur HFO is not expected to be available at all fuel bunkering terminals.

DO & GO will be utilised instead. This means, the operator will have to carry out a change over between these fuels much more frequently. This is considered a safe operation, but only if the appropriate procedure is followed.

The electronic control of ME/ME-C engines, or the new ME-B type engines, provides much wider possibilities for emission control. The electronically controlled fuel injection, exhaust gas valve actuation & turbocharger control, as well as combinations with design changes of the primarily combustion chamber components, have shown great possibilities. We have made extensive investigations on the MAN Diesel 4T50ME-X research engine in Copenhagen to explore the sensitivity of engine parameters against fuel type and physical and thermodynamic conditions on the engine. The study exhibit a promising trade-off between the engine fuel consumption & the NOx level. Such studies are now a part of our very promising development work.

To give operators a unified technical file to be followed by MAN B&W licensees, a procedure has been developed by MAN Diesel and accepted by the flag state representatives, i.e. the classification societies

Until now, local rules have been introduced in Sweden, Norway, and the harbour of Hamburg where, for example, a harbour-fee reduction is used as an incentive to use low-sulphur fuel, but with limited impact on environment, specially with regard to the emissions from the ships in international operation.

A general worldwide emissions limitation seems to be the only way that all countries can benefit from a reduction in emissions. Emission limits should follow state-of-the-art technology & the ability of the market to adapt to such limits.

These considerations includes not only the fuel used & the engine design, but also operational issues & type of cylinder lube oil & dosage used are influencing factors.

With regard to the lube oil, MAN Diesel has developed the so-called Alpha Lubricator, which enables the operator to make a considerable reduction in the cylinder lube oil & consumption &, thereby, achieve a reduction in particulate emissions.

With turbo-generator and turbo-compound system plants, the prime mover can be configured to reduce the plant’s consumption of fuel and, beneficially, achieve a reduction of emissions. This concept utilises the high-efficiency air flow from the turbochargers for the power take-off or power take-in system.

When the engines are supplied from the engine builder, they have, unless otherwise specified, been prepared to meet the IMO speed related NOx limit curve for the Tier II. This is achieved with the NOx-emission optimised fuel injection valves & nozzles &, if required, a slight delay in fuel injection. For the fuel valves, the number & size of the spray holes are the influencing factors, whereas for the HC & particulate control, the influencing factors are the valve design &, in particular, the sac volume, as well as injection pressure & profile.

Technological development over the last decade have made it possible to commercially launch what is used to be referred to as the electronic engine. In the MAN Diesel engine portfolio, this concept is named as ME/ME-C & ME-B, including a range of low speed engines with most of the same bore, stroke & process parameters as their MC/MC-C counterparts.

The “E” range includes engines with online continuous control of the timing of the fuel injection & exhaust valve opening & closing, by means of electronic control acting via a high-pressure hydraulic oil interface. The ME-B engines have electronic fuel injection timing control, like the ME engines, but at the same time they have a light duty camshaft for the mechanical exhaust valve opening.

The independently controlled exhaust valve timing adds to the benefit by assuring a more optimum air supply to the cylinders at any load condition.

Both ME & ME-B engines benefit from the lower fuel penalty when complying with Tier II, compared to Tier I, contrary to its mechanical counterparts, due to the possibility of rate shaping.

Reducing NOx emissions is normally related to an SFOC increase, & our evaluation of the impact on SFOC & other main performance parameters are outlined in Table