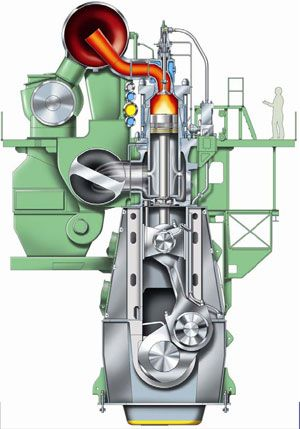 The requirements for the hot part components are diverse and often conflicting with each other. Component temperatures of 600 °C and above presuppose the correct material selection and a proper cooling. The thermal stresses, caused by the temperature gradients, have to be considered in the low-cycle behaviour analysis. The components around the combustion space are bolted together with elastic studs, which are pre-tensioned such that no leakage and no dynamic sliding between the components occurs. Ultimately, the level of dynamic stress in the different components, induced by the cylinder pressure, may not exceed the set limits.

One of the main contributors to the reliability of a two-stroke marine Diesel engine is the piston running behaviour, which is directly linked to the design of the hot parts. The standard measures applied on modern Wartsila engines have already been verified for many years. They include:

The cylinder liners are made up from the grey cast iron alloy which offers the best compromise between manufacturability, piston running behaviour and mechanical properties.

Piston: Finding the proper cooling is one of the main challenges for the piston designer. With the so called jet-shaker cooling principle(see Figure below), which is applied on the most Wärtsilä engines, it is possible to keep the temperatures below the limit on the combustion space side as well as in cooling bores. Too high temperatures at the piston top would lead to the material losses due to the corrosive attack from the combustion gases. Excessive temperatures in the cooling space can result in carbon deposit build-up with negative consequences to the cooling efficiency. For a reliable engine performance , it is also essential to keep the temperatures around the piston rings within a certain range.

The piston is exposed to pressures up to 200 bar, so it is designed such that the stresses and deformations caused by the combustion forces remain within the limits. The main piston components: piston head, skirt and rod including their bolting have to be designed very carefully to avoid any dynamic sliding at the joint faces.