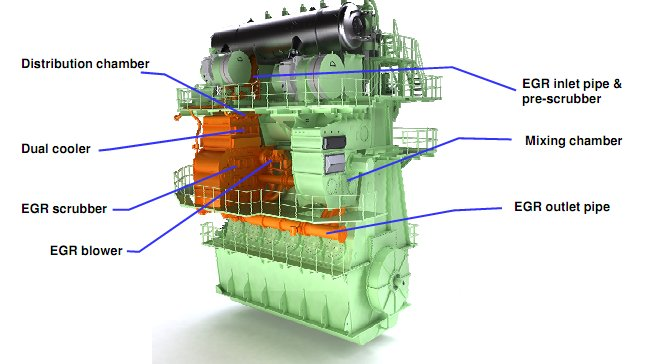 A conventional measure of the combustion quality, & the traditional way of qualifying the emission, is to measure or simply look at the smoke intensity. The exhaust gas plume, when it leaves the top of the stack, may be noticeable for the various reasons, e.g. due to its content of particulate matter & nitrogen dioxide, NO2(a yellow/brown gas), or of condensing water vapour. However, it may be argued that these components are either subject to separate legislation (NOx, particulate matter) or not harmful(water), it is a fact that smoke and/or opacity limits are conventionally applied in certain countries, e.g. in the USA.

At transient load & at low load, smoke is often visible, but average smoke values for the most recent generation of the MAN B&W engines are so low that the exhaust plume will be invisible, except if, water vapour condenses in the plume, producing a grey or white colour. But, the NO2 may give the plume a yellowish appearance.

Particulate emissions in the exhaust gas may emanate from a number of sources:

Once the fuel oil is atomised inside the combustion chamber of the diesel engine, the combustion process involves small droplets of the fuel oil which evaporate, ignite, & are subsequently burned. During this process, a tiny part of the oil will be left as the nucleus comprising mainly carbon. The contribution from the lube oil comprise mainly of calcium compounds, viz. sulphates & carbonates, as calcium is the main carrier of alkalinity in lube oil to neutralise sulphuric acid. Thus, particulate emission will vary substantially with fuel oil composition & with lube oil type & dosage. It is thus difficult to state general emission rates for these particulates.

Generally, the particles are small, and it can be expected that over 90% will be less than 1 μm when heavy fuel oil is used, excluding flakes of deposits peeling-off from the combustion chamber or the exhaust system walls, which in general are much larger.

Apart from the fact that the smoking engine is not a very pleasant sight, the soot from the engine can cause difficulties, specially if it is “wet” with oil. In such instance, it may settle in the exhaust gas boiler, specially on cold surfaces, thus increasing the back pressure & representing a boiler fire hazard. Combustion process control, together with suitable temperature control in the boiler, & frequent cleaning, are the ways to avoid this problem.

Hydrocarbons(and the trace organics) During the combustion process, a very small part of the hydrocarbons will leave the process unburned, & others will be formed. These are referred to as unburned hydrocarbons, & they are normally stated in terms of equivalent CH4 content.

The content of the hydrocarbons in the exhaust gas from large diesel engines depends on the type of fuel, & the engine adjustment & design. Reduced sac volume in the fuel valves has greatly decrease HC emissions. The sac volume is a void space in the fuel valve downstream of the closing face.

Measurements clearly show that the slide type fuel valve design has quite an impact on HC & particulates.

For HC & particulate control in general, slide-type fuel valves are used. The latest valves feature both the zero-sac volume & the low-NOx spray pattern.

Particularly the higher injection pressure of ME engines at all loads will enhance combustion & lower the amount of particulates.

The sulphur content in the fuel oil has a strong influence on the particle level in the exhaust gas. IMO and the EU have introduced a restriction of sulphur of 1.5% in SECA areas like the North Sea and the Baltic Sea in northern Europe. And local marine emission rules, e.g. in Sweden and Norway, are aimed at reducing particulate emissions substantially.

Tests & analyses of exhaust gas have shown that a high-sulphur HFO can give particle levels that are several times higher than if the engine is run on the gas oil. A large part of the difference between HFO & DO is linked to the sulphur, which together with water forms particulates.

Correspondingly, long time use of the lower-than-average sulphur fuels will call for the use of lower BN lube oils in order not to overdose the combustion chamber with the deposit generating additivated oils. This will be particularly relevant for the engines operated continuously at high load having less requirement for the SOx neutralising on the liner surface due to high temperature.