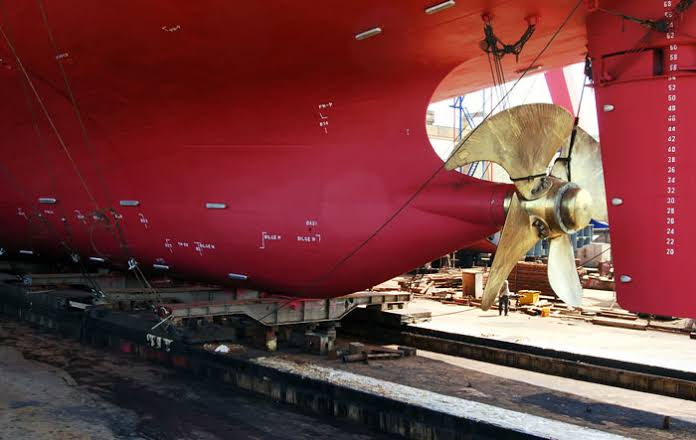 Situation while sitting on the chocks inside drydock – The GM, BM, KB and KG vary in such situation, as a result the transverse KM (KB+BM) will become 0. It is because there is no displaced volume to provide buoyant forces.

Cut to the GM, which is given by the difference between KM and KG, KG is an inherent characteristic of the ship geometry & cannot be 0. Hence, a negative(-) GM results in the loss of positive stability &  so the ship should be balanced before it topples.

Trim by aft is a common feature in ships when moving in the water. When the vessel will start taking support on the blocks along the entire length, it will first touch at the stern. The remaining part of the ship may get pivoted about this point. Now, if the ship is able to keep a positive GM, it won‘t heel to either side, enable a comfortable settlement.

This is quite difficult in ships with a slender form without a flat bottom. So here comes an advantage in the design where it might be suitable not to design very large slender form of the ships as performing manoeuvres would be a problem. Such ships would need side supports & the bilge blocks‘ in addition to the usual support.

How much loss of the GM is allowable? For this, the dry docks use a graphical plot between the transverse metacentric height & the effect given by the blocks in supporting the vessel. Which is also calculated is the docking trim (difference in forward & aft drafts) and the reaction(called the upthrust) from the blocks. The graph quite reasonable has a slope KM/, which shows the loss of KM(& so the GM also) per unit tonne of upthrust equivalent added. Another characteristic of the dry dock which disturb your ship‘s stability is what is called declivity. In simple terms, this declivity is the slope indicated in terms of multiples of unit metre rise per 100 metres. It is advisable for the vessels like tugs & fishing trawlers with a rise of keel to be repaired in the dock with some declivity as they run with proper propeller immersion as a result of the deep draft aft of these vessels.