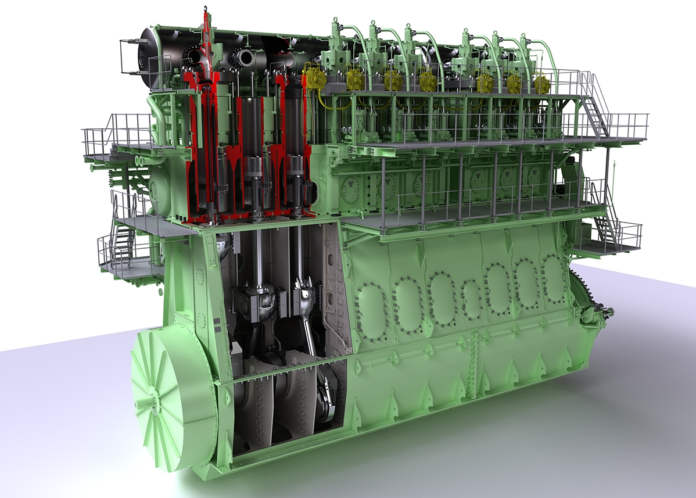 PECULIARITIES OF THE TWO-STROKE ENGINE BUSINESS

The two-stroke engine business is characterised by a few peculiarities which have a significant effect on the engine development and design. Firstly, due to decentralised production, the licensee model has been established over decades whereby the engine manufacturer, or licensee, builds the engine under license from the engine designer, the licensor. This presents several organisational & technical challenges to the engine designer which will be explained below. Secondly, due to the size of the engines and the sheer investment needed for a prototype of each new model, the prototype testing often takes place at the licensee’s premises, on a customer engine. Thirdly, the broad use of Heavy Fuel Oil (HFO) with significant sulphur content and viscosities up to 2000cSt at 20°C, need several measures such as trace heating, specially developed fuel pumping & injection equipment & special alkaline oils for piston lubrication to deal with acidic combustion residues. Ultimately, the constantly changing nature & volatility of the marine shipping business & the variety of vessels where the engines are applied require a high degree of engine customisation, which is made possible by the low production volumes of manufacturers.

The 2-stroke engine development process is, similar to the development in other engine segments, highly iterative. The process will be simplified below for the purposes of this paper, and for better understanding will be separated in thematic and/or system sections. The most important development steps that take place are the following:

The following diagram displays some of the most important process steps