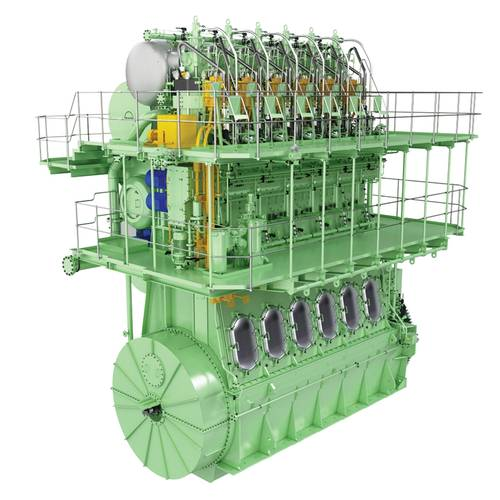 In a slow-speed 2-stroke engines the cylinder distance & consequently engine length are invariably decided by the powertrain layout, which takes place in parallel with thermodynamic layout. Cylinder distance determination is central to engine development since it gives the geometrical boundary conditions for most other design groups. Figure below shows a cross section of the crankshaft and the cylinder distance, which comprises:

The selected cylinder distance is verified against other the possible influences, such as connecting rod thickness, crosshead bearing or cylinder cover arrangement(bolts, valves). Historically, 2-stroke engines have had uniform cylinder distance, but modern engines such as the Wärtsilä-X92 have variable cylinder distance

Throughout this development process the engine designer is confronted with numerous choices for design concepts, trade-offs and material choices, the most important of which are described below:

A higher crankshaft centreline height(b) permits a narrower(lower part) bedplate width but results in the higher overall engine height. The bedplate side walls are often slanted in order to optimise the width at the bottom but still allow for enough space for the swing radius (a) at centreline height.

Due to the sheer engine size of the largest engine models (such as the Wärtsilä X92), manufacturers often come to size limitations with several components, such as, but not limited to: