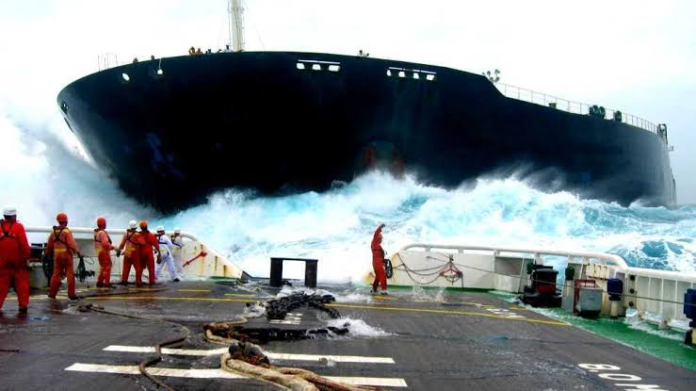 Marine salvage is the procedure of recovering the ship & its cargo after a shipwreck or other maritime casualty. Salvage may surround towing, re-floating a vessel, or effecting repairs to the ship. Today, saving the coastal environment from oil spill or other pollutant is a high priority. Before the innovation of radio, salvage services would be given to a stricken vessel by any ship that happened to be passing by, recently most salvage is done by specialist salvage firms with expert crew & equipment.

The legal importance of salvage is that a successful salvor is qualify for the reward, which is a percentage of the total value of the ship & its cargo. The amount of the award is decided subsequently at a “hearing on the merits” by a maritime court in compliance with Articles the 13 & 14 of the International Salvage Convention of 1989. The standard law idea of salvage was accepted by the English Admiralty Court, & is explained as ” a voluntary successful service provided in order to save maritime property in danger at the sea, qualifying the salvor to the reward”; & this definition has been further rectified by the 1989 Convention.

Generally, a “successful” salvage was one where at least some of the ship or cargo was protected, or else the principle of “No Cure, No Pay” meant that the salvor would get nothing. In the  year 1970s, the number of marine casualties of single-skin-hull tankers results in serious oil spills. Such casualties were displeasing to salvors, so the Lloyds Open Form (LOF) made rule that a salvor who acts to try to avert environmental damage will be paid, even if failed. This Lloyds initiative proved so favourable that it was included into the 1989 Convention. All the vessels have an international duty to give reasonable aid to other ships in distress in order to save life & property, but there is no responsibility to try to salve the vessel. Any proposal of salvage aid may be denied; but if it is adopted a contract arises to give the successful salvor the right to award under the 1989 Convention. Generally, the ship & the salvor will sign up to an LOF agreement so that the terms & conditions of salvage are clear. Since 2000, it has become standard to include a SCOPIC clause to the LOF, so as to avoid the restriction of the “Special Compensation” provisions of the 1989 Convention (pursuant to the case of Nagasaki Spirit).

Ship salvage and the law

Salvage law has as a base that the salvor should be awarded for risking his life & property to save the property of another from danger. Salvage law is in some ways same to the wartime law of prize, the capture, censure & sale of the vessel & its cargo as a spoil of war, insofar as both compensate the salvor or captors for risking life & property. The two areas of law may agree. For example, a vessel taken as the prize, then recaptured by the friendly forces on its way to the prize judgement, is not considered the prize of the rescuers. But the rescuing vessel is qualify to the claim for the salvage. Similarly if a vessel found badly damaged, rejected & drifting after enemy fire stop her does not become the award of the rescuing friendly vessel, but the rescuers may ask for the salvage.

A vessel is regarded as in danger if it is in danger or could become in danger. Examples of a vessel in danger are when it is aground or in danger of going aground. Before the salvage attempt the salvor get consent from the owner or the master to help the vessel. If the vessel is left abandoned no consent is needed.

The amount of the reward rely on, in part, the value of the salved vessel, the degree of risk associated & the degree of danger the vessel was in. Legal argument do arise for the request of the salvage rights. To decrease the amount of the claim after an accident, boat owners often remain on board & in command of the vessel; they do all the things possible to decrease further loss & seek to reduce the degree of risk the vessel is in. If another vessel offers a tow & the master or owner bargain an hourly rate before receiving then salvage does not apply.

Some maritime rescue corporation, such as Britain’s Royal National Lifeboat Institution, do not require the crews of their lifeboats reject their right to request reimbursement for the salvage. But should they opt to make a request, they should pay for the use of the lifeboat & make good any damage suffered by her. Claims for the salvage by lifeboat crews are unusual. Jetsam are goods that were thrown off a vessel, which was in peril, to save the vessel. Flotsam are goods that floated off the vessel while it was in danger or when it sank. Ligan or lagan are goods left in the sea on the wreck or tied to the buoy so that they can be retrieved later by the owners. Derelict is  the abandoned vessels or cargo.

In the United Kingdom under the Merchant Shipping Act 1995, jetsam, flotsam, lagan & all other cargo & wreckage persist the property of their owners. Anyone, including recreational divers & beachcombers, withdraws those goods should notify the Receiver of Wreck to prevent the accusation of theft. As the amusement activity of wreck diving is common, there are laws to save historic wrecks of archaeological importance & the Protection of Military Remains Act 1986 saves ships & aircraft that are the last resting place of the remnant of members of the armed forces.

The 1910 Brussels Convention for the Unification of Certain Rules with Respect to help & Salvage at the Sea reflects the conventional legal principles of marine salvage. The 1989 International Convention on Salvage includes the important rules of the 1910 Convention, & added some new rules besides. The 1989 Salvage Convention enforced on 14 July 1996 with nearly 20 parties in agreement. For countries which are members to both conventions, the 1989 Convention takes priority over the 1910 one where their provisions are mutually conflicting.