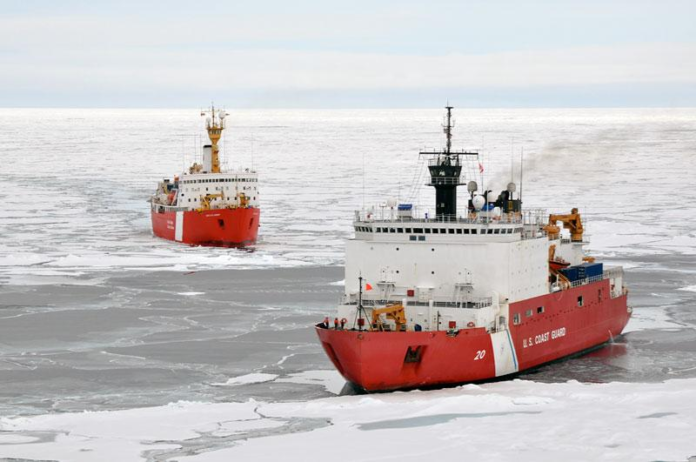 Rudder and propeller of a ship in ballast and loaded ship are operating in different conditions.

Propeller of a ship in ballast is in constant interaction with the ice – the ship is subjected to vibration – answers the helm poorly and has almost no inertia, and could easily be stopped on entering heavy ice.

Rudder and propeller of a loaded ship are fully submerged in water. It decreases their contact with ice, therefore it is easier to handle the ship and as a result it is easier to pass more difficult ice.

While navigating in drifting ice floes, the ship has to avoid rapid change of course and keep her stern part away from the ice edge while turning.

If it is necessary to enter an ice floe, the ship should approach it at a right angle (90 degrees) with minimum steering way (without inertia), later gradually increasing her speed to keep the initial slow speed until the ice floe is broken. If cracks are no longer made the ship should carefully watch for her speed to be able if it is necessary to return to initial point.

Turning in the lead a ship has to keep to the inner side of the lead, trying to avoid contact of her stern part with the ice edge.

It is especially important to protect her rudder and propeller from the ice damage when the ship is moving astern, when the ice broken by the aft part of the ship. In this case the rudder should always be amidships and the propeller should be rotating until the ship is finally stopped in the ice.

It is not recommended to enter the ice compacting area if the ship is proceeding without assistance.

If the ship is still in the compacting area all measures for leaving it as soon as possible should be undertaken.

The ship is advised to steer upwind & avoiding navigation hazards in the area return to friendly ice or open water.

If the ship is beset all measures to protect her rudder and propeller from being blocked by ice should be taken, you should continue movement, inform the ice breaker, keep her engine running and constantly watch for changes in the situation.

Reliable use of radar for the ice navigation is possible when deck officers have appropriate experience and within distances not exceeding 5 nm. It is possible to select the way between ice floes only at a distance of 2-3 nm, and type of the ice could be determined only in close proximity to the ship. The ice edge as well as separate ice floes are easily detected on the radar screen. Hummocks are seen as a generic noise on the radar screen. Sometimes, even heavy ice could be mistakenly recognized as open water. To obtain experience of radar usage in ice which could be utilized later it is recommended to use radar in good visibility in different ice conditions.

During the night time the ship uses her search light and deck illumination. Search light is used for the ice edge detection. When the ship is proceeding in convoy, it should be remembered that the light from your searchlight could easily blind the ice breaker or the ship ahead of you. It is recommended to use the Suez canal light to illuminate the ice edge right ahead of your ship.

SOME RECOMMENDATIONS ON UNASSISTED OPERATIONS IN ICE

Prior to ice navigation the ship should be adequately prepared well before approaching the ice edge.

The ship bound to the port should arrive at nominated point of convoy (NPC) unassisted, therefore passage planning is essential.

The master should take into account position of NPC, local and ice conditions, and inform the Agent about expected time of arrival (ETA) accordingly.

The track from open water to NPC is normally passed unassisted therefore it is recommended if possible to plot the course through the areas of open water, friendly ice, trying to avoid forcing drifting ice floes and areas of ice compacting.

When selecting the track in the ice the Master should always observe the following rules:

SOME RECOMMENDATIONS ON NAVIGATION IN AREA OF HUMMOCKS

Hummocks are very serious obstacles for merchant ships and if possible should be avoided. It should always be remembered that the major part of the hummock is beneath the water surface. If the ship enters the area of hummocks by stern, it almost always sustains damage to propeller blades or rudder, even if the engine is running and rudder is amidships. Therefore while turning it is very important to watch for the ship stern to be off the hummocks.

When the ship is proceeding in the area of hummocks, even through the ice lead under the ice breaker assistance her speed decreases rapidly. Even the loaded ship touches the ice by propeller, as a result vibration of the hull is significantly increased. If the ship has not sufficient headway to force the hummock the ship gets stuck within the hummock and cannot proceed further without the ice breaker assistance. There is practically no open water lane abaft the ship.

SOME RECOMMENDATIONS ON PORT OPERATIONS

During the winter time port waters are covered by broken and brash ice. Presence of ice makes mooring operations as well as tug assistance more difficult than usual.

For efficient and fast mooring in ice conditions, the berth should be prepared accordingly.

Never ever try to overtake the unassisted ship proceeding in the ice lead ahead of you.

The most dangerous moment is when the bow of the overtaking vessel is approaching the stern of the vessel being overtaken – at this time it is possible to break the ice between ships.

You can change your course to the ship in the ice lead only when you pass half of her length.

Sometimes there is a necessity to pass the ship on the opposite course in the ice lead.

There are two methods of meeting:

1) when the ship leaving lead stops her engine, and

2) when she does not stop her engine.

In the first case the ship leaves the ice canal in the area of friendly ice and waits for the other ship to pass.

As soon as the ship using the ice lead passes more than a half of the ship waiting outside the lead, the latter runs her engines astern and enters the lead again.

The second case when both meeting ships have way is faster and more dangerous. In this case the ice must let the ship leaving the ice lead proceed without getting stuck. Distance between the ice leads must be sufficient to prevent ice from being broken because of the motion of vessels.

Sometimes, it is possible to stop the ship using the ice canal and pass her when she is stopped. In this case it is recommended to enter the lead only after the waiting ship is finally past and clear. However, the use of this method depends on the local ice conditions as the ship in ballast could not have enough power to resume her voyage.

In case of keeping the speed it is necessary to watch for the speed and adjust the engine status as required to maintain the ordered speed.

In all circumstances constant radio contact between the ship and the ice breaker is essential, all doubts and questions must be clarified with the ice breaker as soon as they arise.

If another ship is following your ship you should inform her about all changes of your speed, especially if your speed is rapidly decreasing.

Every ship in convoy has to watch for her position in the convoy and control the depth around. In case of any doubt regarding suffi ciency of depth the ice breaker master should be informed immediately.

HOW TO FASTEN THE TOWING LINES

Towing by the ice breaker is used when the engine power of the ship is insufficient for the ice navigation or when navigating in compacting ice. As a rule, close-coupled towing is used. The towing wire is sent through the anchor lead and fastened to the bridle on board the ship. In rare cases towing wire may be fastened directly to bollards.

In case of close-coupled towing the ship constantly works with her engine and steers by her rudder, trying to keep the ice breaker in line. Constant radio contact with the ice breaker is essential for proper compliance with his orders regarding the engine status, rudder position and in extreme cases for fast release of the towing wire.

Sometimes there is a necessity to take a pilot or other man from the ice on board the ship or disembark crew members on the ice for the ship’s hull inspection. In this case gangway or pilot ladder is rigged in the most convenient place. Rigging place is selected where there is the easiest accessible place on the even ice, without cracks or hummocks.

More frequently there is a necessity to take a pilot, doctor or someone else from the ice breaker. In this case the ice breaker approaches the ship staying in the ice either by bow or by stern depending on the height of the ship’s freeboard. Having taken all her way off at a distance of 20-50 m to the ship, the ice breaker transfers a man to the ship using the landings or pilot ladder prepared in advance, safeguarding the man from the ship’s side.