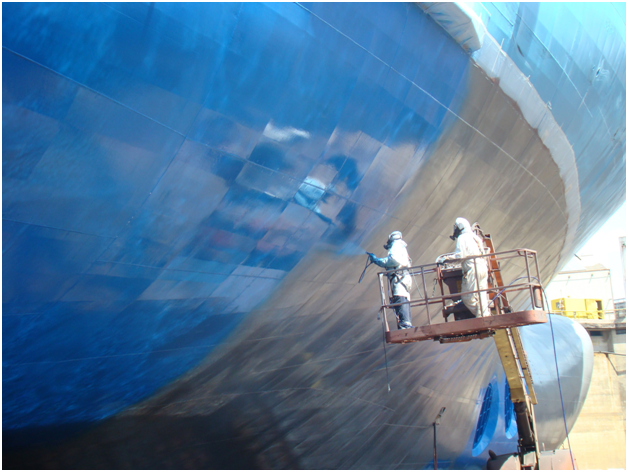 A. Hull roughness of different types of the antifouling paints.

B. Enhancement of foul release coatings by the oil incorporations.

C. Personal and health safety during application of antifouling paints.

A. HULL ROUGHNESS OF DIFFERENT TYPES OF ANTI-FOULING PAINTS

a. There are three main categories of tin-free antifouling paints

B. ENHANCEMENTS OF FOUL RELEASE COATINGS BY OIL CORPORATIONS

a. Fouling release coatings have been developed as an alternative to biocide containing paints.

b. They function by minimizing the adhesion strength of attached organisms, which are removed as the vessel moves through the water

d. Oils by their nature are lubricants and therefore should decrease the coefficient of friction.

e. It has been found that incorporation of low molecular weight silicone polymers oils can enhance foul-release properties of polymerdimethylsiloxane (PDMS) polymers

f. The method for the enhancement of fouling release performance has been oil incorporation, in which a polymerdimethylsiloxane PDMS oil was incorporated into a silicone matrix.

h. Foul release coatings on the underwater hulls and propellers of ships are a revolutionary new way to improve efficiency.

i. They not only provide improved environmental control, since they do not use biocides to prevent fouling, but they have also been proven to provide better fouling control than SPC antifouling.

k. The addition of oil to a PDMS coating further decreases the adhesion of barnacles and certain species of oysters.

l. The environmental impact of these coatings is minimal since oil does not significantly deplete from the coating

C. PERSONNEL AND HEALTH SAFETY DURING APPLICATION OF ANTI-FOULING PAINTS

a. The paints are toxic and can harm personal health as well as marine environment

b. Contact with anti-fouling paint can irritate skin, eyes and even permanently damage your health

d. Respiratory protective equipment should be worn where the paint applied in areas of poor ventilation

f. Spray painting and anti-fouling maintenance should be done in calm weather. This will decrease the chance of your activity impacting other people or the environment