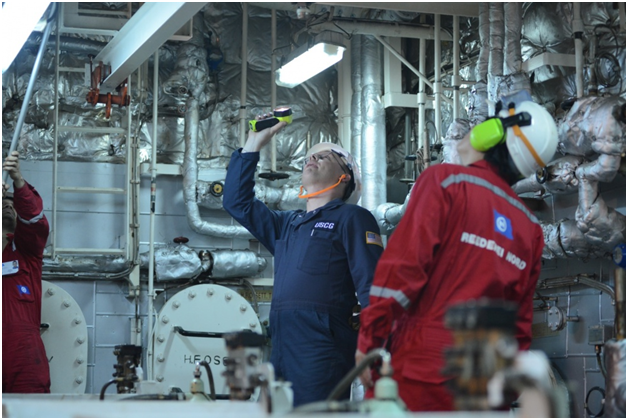 Q. With reference to the PSC inspections, explain various codes used to represent Actions to be taken by the vessel against the deficiencies reported. Your IOPP equipment is not functional for the want of spares awaited in the next port of call. How will you present your case to a PSCO for the voyage permission till next port?

Application: this code is used when all, &  not most of the deficiencies listed in the inspection report are checked & found to be rectified.

Definition: Rectify deficiency at next port.

Application: this code is used when the deficiency cannot be remedied in the port of the inspection. In such case the maritime authority may permit the ship to proceed to another port, if suitable under conditions as determined by the port of inspection.

If PSCO decides to permits rectification of the deficiency at the next port, the next port is informed immediately (code 15 + code 40). In case the deficiency is a detainable one (code 30 + code 15) & cannot be rectified in the port of the detention, the code 45 (next port informed to re-detain) is used at the end of the report.

Application: although, in principle, all deficiencies must be rectified before the departure, code 16 can be used in case of the minor deficiency, which, to the professional judgement of the PSCO, is not dangerous to the safety, health or the environment & does not require immediate follow-up.

Application: this code is used in case the nature of the deficiency requires rectification before the ship proceeds & the PSCO has informed the master accordingly (it is up to the professional judgement of the PSCO to decide, on a case by case basis, if he has to return to the ship to check personally if the deficiency has been rectified).

Definition: Rectify non-conformity within a period of 3 months

Application: this code is used for the ISM non-conformities of ISM related deficiencies. A non-conformity means an observed situation where the evidence indicates the non-fulfilment of a specific requirement.

Attention: In case of the ISM major non-conformity, action taken code 19 is used.

Application: this code is used for the ISM major non-conformity. Major non- conformities have to be rectified before the departure. A major non-conformity means an identifiable deviation which poses a serious threat to the personnel or ship safety or a serious risk to the environment & requires immediate corrective action. In addition, the lack of the effective & systematic implementation of a requirement of the ISM Code is also considered as a major non-conformity.

Definition: Ground for the detention.

Application: this code is used to indicate the deficiency which is the ground for the detention of a vessel.

Code 30/80. In such case there should be indication when a full/definitive repair is to be done.

Application: Used when the PSCO decided that the detention can be lifted.

Application: when the follow-up detention is raised code 36 must be filled in on the inspection form.

Application: PSCO of the “next port” shall board the ship to inspect the deficiencies to be rectified.

PSCO of the “next port” may carry out an additional inspection.

Definition: next port should be informed to re-detain.

Application: used in case when a second port is involved in the continuation or the follow-up of a detention.

Application: when a ship has been detained, the respective port State authority shall inform the flag State / Consul.

Flag State must be informed on every individual detention.

Application: used whenever the flag State is consulted with regard to the relevant deficiencies.

Definition: Temporary/provisional substitution or repair of the equipment or exemption granted.

Definition: Investigation in the contravention of the discharge provisions (MARPOL 73/78)

Application: Code 99 is used if it is not possible to code an action taken with the existing codes.

Voyage Permission from PSCO for next Port of Call:-

1. OWS (Oily Water separator) not working is a detainable deficiency under MARPOL ANX 1.

2. Report same to PSCO, show him correspondence between ship & H.O. and purchase department.

4. Ensure him MARPOL seals records will remain intact, ensure him that repair will be carried before arriving next port & same will be confirmed to next port PSCO.

6. If your vessel is tanker bilge holding tank about to overflow then can be transferred to Slop tank with provision of approved pipeline and make sure that you have sufficient space in Slop tank.

7. You may transfer the contents to waste oil tank and evaporate or transfer to reception facilities upon port arrival.