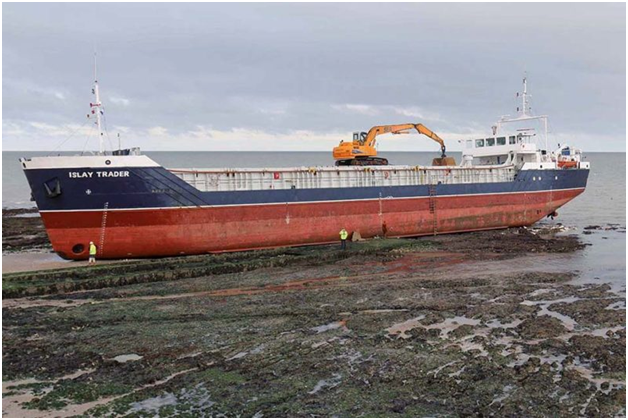 Q. An Indian flag vessel has grounded off the coast of India, & owners have abandoned the property. In compliance with the provision under the Merchant Shipping Act, what steps should be initiated & who should initiate such steps for the safety of the ships & the marine environment.

Whenever a shipping accident takes place & comes under the purview of the M.S.Act as a shipping casualty, the master, the pilot or the persons in charge of ship at the time of the casualty is responsible to give notice of this casualty to the officer appointed by the government under the section 358(2) of the M.S.Act. The proper officers appointed by the government are informed in the official gazette.

Preliminary enquiry : When an officer appointed under the Act received information about the shipping casualty, he is responsible to conduct a preliminary inquiry about the accident.

The aim of the preliminary enquiry is to establish the following:

1. A shipping casualty has occurred within the meaning of Act.

2. The details of the voyage leading to the casualty.

3. Events that led to the casualty

4. Extent to which loss of life or loss of property has occurred due to shipping casualty

5. The causes that led to the casualty including act ofincompetency, negligence or misconduct of person or persons is concerned

The preliminary enquiry, which is held under the section 359 of M.S.Act is departmental enquiry & the proceedings of such enquiries are not informed to public.

In performing the preliminary enquiry, the officer has the following responsibilities:

(2) To go on board the ship & check the same including machinery & equipment, but not unnecessarily detaining or delaying her from proceeding on any voyage

(5) To demand the production of all log books, documents or the papers he thinks necessary for the enquiry

(6) To submit the report to central government

If any person refuses to attend & answer or to produce required evidence or to impede the enquiry, officer should call his attentions to the power given to him. In case he still refuses, he can take action under the chapter X of the Indian Penal Code.

Persons who may be present at the examination; Where the owner or the agent of a ship, a casualty to which is being investigated shows his desire to be present but only while witness belonging to the ships at which he is directly interested are being inspected, & he must be requested to remain silent. He may take note of the evidence, if he desires but should not interfere examination of the witnesses. Barring this, no person is to be present in room during the examination of the witness excepting the deponent, The officer conducting the enquiry & his clerk & if required an interpreter. Professional lawyers are not permitted  in to the proceedings of the preliminary enquiry or formal investigation.

Whenever it appears that the event leading to ship casualty, demand a formal investigation by the court, the D.G.Shipping, by virtue of power delegated to him under section 360 of the M.S.Act may direct the same to be held. On receiving the order of the director general the proper officer shall make an application to the court of empowered under 361. The aim of the court empowered under 361 is not to punish anyone who may have been at fault, but to throw light on the cause of the casualty & to consider steps to avert such casualties in future. Only first class magistrates are empowered to conduct these formal investigations.

The courts are assisted by the assessors having the requisite technical knowledge & are independent of all the interest concerned. The assessor are appointed by the court out of the list which is maintained by the directorate.

Where formal investigation required likely to involve any question regarding cancellation or suspension of certificate of competency of the master, mate or engineer, the court shall be assisted by not less than two assessors having the requisite experience in merchant marine service.

Apart from the officer on whose application this investigation is undertaken, any person upon whom a notice of the investigation has been served, any other interested parties may be allowed to appear at investigation & become a party to the proceedings.

On the appointment time & place for holding investigation, the court can proceed with investigating witness the parties upon whom notice of the investigation have been served are present or not.

Report of court, unless the cancellation or suspension of any officers certificate is not involved, the court need not tell its decision in open court. It may send or deliver to the parties a copy of the report as needed by 369 of M.S.Act to be transmitted to the central government.

The court should submit its report to the central government in duplicate. Where suspension of officers certificate of competency is involved, the court may deliver its decision in open court & also send or deliver to the parties a copy of the report to be transmitted to the central government. Where the certificate is suspended & the court has recommended a certificate of lower grade should be issued, the same shall be issued by D.G.Shipping through the principal officer concerned.