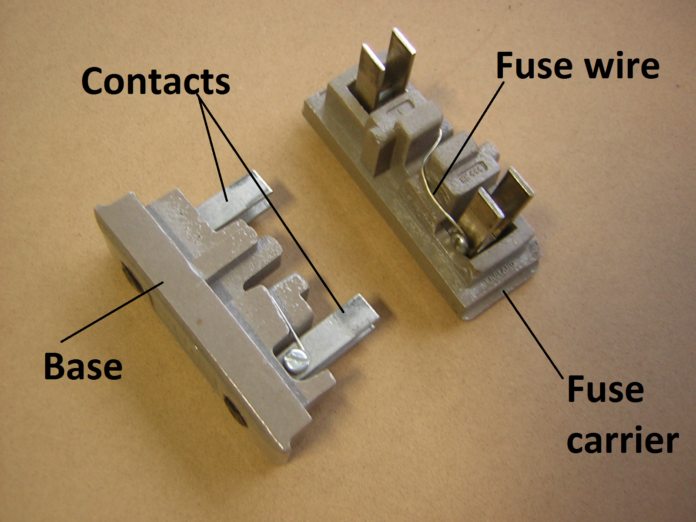 A fuse is a one type of low resistance resistor that acts as a sacrificial device to provide over current protection of either the load or source circuit.

The principle on which fuse works is “heating consequence of the current”. It is fabricated with a lean strip or thread of metallic wire. The connection of the Fuse in an electrical circuit is always in series. When too much current is produced due to the heavy flow of current in the electrical circuit, the fuse gets soften and it opens the circuit. The extreme flow of current may direct to the collapse of the wire and prevents the supply.

The fuse can be changed by the new fuse with an appropriate rating. It can be designed with the elements like Cu (copper), Zn (zinc), Al (aluminum) and Ag (silver).

The selection of a fuse can be done by calculating the fuse rating by using the above formula.

These have insulated carrier for safe handling and are enclosed in asbestos lined tube.

Wire are easily replaced after operation.

Design is subjected to abuse. As thicken wire can be used which could mask the fault and cause arcing if it does not operate. Another fault is the premature failure if thinner wire used due to oxidation or contact with air or being stretched while being filled.