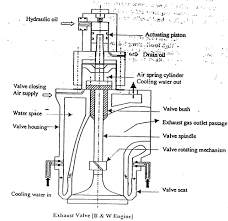 What is Virtual Tappet?

Unlike Aux Engines which have a manual tappet to adjust, there must be a tappet clearance for the Main Engine as well. But with the absence of a rocker arm and spring – how do we adjust the so called TAPPET ?

The answer lies in the fact that there is no real tappet in the main engine.

The Exhaust valve is actuated hydraulically by oil from a hydraulic pump and is shut by spring air, when the spring air pressure exceeds the hydraulic oil pressure. This happens when the roller (of the pump that is actuating the hydraulic valve) is resting on the base circle of the cam.

There is a valve called a throttle valve that is fitted on the hydraulic pump unit (which actuates the opening of the exhaust valve).

When the system is just put into use the oil is relatively cold. After some time of operation the oil heats up and expands. This additional oil can make the exhaust valve stay open – leading to reduced Pcomp, Pmax, reduced power and burning of the valve seat.

In order to prevent the valve being open due to the expansion of hot oil, the throttle valve bleeds off a small quantity of oil each time the valve closes.

Correct setting of the VIRTUAL TAPPET ensures positive closing of the valve in a smooth manner without bouncing.

Throttle valve: It is needle valve, at bottom of the cylinder. This is compensation for leakages which can occur in system. It is usually set by builders and adjusted at a trials. Tightening the throttle screw reduces the leakage amount and vice versa.
a) if leakages are small, then amount of pressure generated within the high-pressure line will be more. This will cause the exhaust valve to open earlier & close later, then intended. To certain degree it will increase SFOC and thermal load on valve seats, will also cause deterioration of the dead slow performance. To compensate for this the throttle valve will be opened which will bleed oil from the system.
b) When leakage increases (if total leakage amount coming from the throttle valve and hydraulic system. exceeds a certain quantity), the pressure in the high pressure line, falls too quickly, the valve will “knock” while closing. Pressure impact can also appear in hydraulic system when valve is opening. This increase in impact can increase seat indentation damage. In this case throttle valve should be closed to prevent this noise and damage.