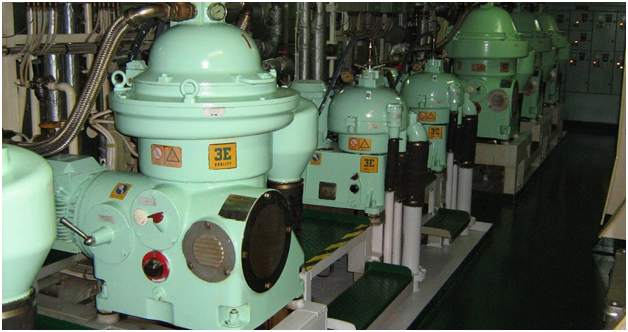 Q. With the latest emission control requirements, storage and purification of marine fuel oils onboard has become a challenge for Chief Engineers. Against this background, discuss:-

A. Challenges with the traditional fuel purification systems on the existing ships.

A. CHALLENGES WITH TRADITIONAL FUEL PURIFICATION SYSTEMS ON THE EXISTING SHIPS:

i. Composition of the fuel

iv. Cleanliness of the separator and its general working conditions.

2. Maximum Aluminum and Silicon (Al + Si) limit: In a complex refinery, HFO is used as a blending component.  Damaged aluminum silicate catalyst particles of the catalytic cracker are not able to completely removed from HFO stream, & are found in mg/kg amounts in the heavy fuel blended with the HFO. To avoid abrasive damage in the fuel system onboard the ship, it is required to limit the amount of Al + Si to a level which can be removed by the ship’s fuel cleaning system

3. Maximum total sediment aged limit: The stability of the asphaltenes is deteriorated by the vis-breaking process, & instability problems can cause fuel purification & filter-blocking problems, hence the need for a specification to assure adequate fuel stability

4. For the fuel oils with a viscosity more than 180 mm2/s at 50°C, it is adviced that the highest possible temperature (98°C) be maintained. The fuel oil has to keep in the centrifuge bowl for as long as possible by adjusting flow rates through the centrifuge so that it corresponds to the amount of the fuel needed by the engine.

5. To assure optimal cleaning of a fuel oil, a second separator can be used in series operation, e.g. a purifier followed by a clarifier. The density limit of 991 kg/m3 is not applied to clarifier operation, but the combined system of purifier & clarifier in the series remains restricted to a maximum density of 991 kg/m3 at the temperature of 15°C. Heavy movements of the ship can stir up dirt, water & sludge that have accumulated over time on the bottom of the bunker & settling tanks. Efficient purification is not always possible when separators have been put in a parallel purifying function.

oil if the fuel oil has some amount of water. (The prior use of the purifier with its continuous water removal is mandatory.)

1. Fuel oils with the densities more than 991 kg/m3 at 15°C are available on the market & can be purified, for example, with the ALCAP system, which permits fuel oil densities up to 1010 kg/m3 at a temperature of15°C. Fuel oil is continuously fed in to the separator. The oil flow is not disturbed when sludge is discharge.

2. The ALCAP generally operates as a clarifier. Clean oil is continuously discharged from the clean oil outlet. Separated sludge & water accumulate at the periphery of the bowl. Sludge (and water) is removed after a pre-set time.

3. If separated water approaches near  the disc stack (before the pre-set time interval between two sludge discharges is reached), some droplets of the water start to escape with the cleaned oil. A water transducer, fitted in the clean oil outlet, immediately senses the small increase of the water content in the clean oil.

4. A signal from water transducer is transmitted to a control unit & changes in water content are calculated.

5. Increased water content in cleaned oil is the signal of reduced separation efficiency for not only water, but for the removal of the solid particles, as well. When the water content in the cleaned oil attains the pre-set trigger point, the control unit will initiate an automatic discharge of the water that has accumulated in the bowl through the water drain valve

6. water is discharged either with the sludge at the periphery of the bowl:

a) separated water does not reach at the disc stack in the pre-set time between sludge discharges, or by the water drain valve

b) Separated water reaches disc stack before the pre-set time between sludge discharges.

The second issue that has to be resolved is linked to the cat fines. Globally the ISO 8217 limits this to 60 ppm m/m & anything more than 10 to 15 entering the engines is in excess, this also does not take into consideration the size of the Cat Fine in microns. Reduction of these can be done onboard by the proper settling filtering & purification. In the settling process there will be a reduction in the ppm of cat fines but this largely depends on the duration given for the settling. Sometime continuous running will not give sufficient time for the same. Plus during bad weather the settled fines sometimes mix up & enter the system.

The next line of the defence is the purification system. New systems made for the monitoring of the cat fines (at the outlet of the purifier) have been developed & are being fitted now a days. Some of them are by Catguard from NanoNord, GEA Westfalia Separator CatFineMaster etc.

2. Fuel stability: The potential for a fuel to change condition in storage in certain circumstances, depending on its resistance to breakdown

3. Bulk fuel stored for long periods can become unstable – the asphaltene content can precipitate out of solution causing the formation of sludge. This has the potential to block filters & pipes, leaving tanks with an non-pumpable residue

5. Heating Bunker & Settling Tanks averts water condensation. Heating these beyond the fuel’s flash point temperature however may cause explosion & thermal currents will interfere with sedimentation in the settling tanks

6. Avoid Fuel Commingling. If unavoidable, mix them only after checking the compatibility. And if compatibility check is not possible, minimize the quantity of one fuel in the mixture

8. Do not commingle fuels. If commingling is unavoidable, check the compatibility of fuels in advance, & make a final decision based on the test result. If a compatibility check is not possible then reduce the amount of one fuel to a minimum before adding the second fuel.

1. Residual fuel oils today are still an unprocessed product made from the heavy fraction of the crude oil remaining after the most valuable products have been extracted.

2. The main types of residual fuel additives in the marine and power generation markets are:

3. The combustion phase is one of the areas where marine residual fuel oil additives can be used to advantage. A combustion improver can be organic, containing iron or other metals. The use of an iron-based component as an oxidation catalyst to accelerate main combustion & enhance complete combustion of the residual fuel oils is a proven technology

5. HFO additives include fuel stability additives, combustion improvers, corrosion inhibitors, & ash modifiers. HFO combustion additives can be added to the problem fuels, improving their performance. Since the fuel becomes a premium treated, usable product, it can be burnt easily without causing boiler or engine problems.