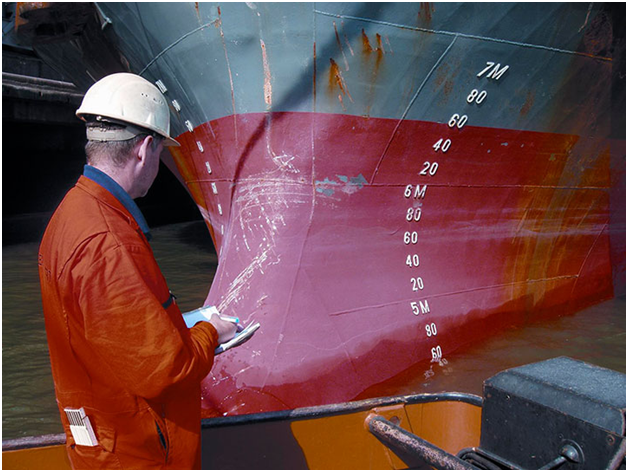 Q. Define ‘Unseaworthy ship’ within the meaning of MS Act 1958 as amended. Explain the detainable deficiency with reference to the PSC inspection & describe the procedure to be followed for timely release of a vessel detained for serious structural deficiencies under the PSC.

Under the section 334 a ship is said to be unseaworthy “when the materials of which the vessel is made, her construction, the qualification of the master, the number, description & qualification of the crew including officers, the weight description & stowage of the cargo & ballast, the condition of her hull & equipment, boilers & machinery are not such as to render her in every respect fit for the proposed voyage or the service.”

A deficiency that is an immediate threat to the ship, its personnel or the environment, which makes the ship unsafe to proceed to the sea. A ship can be detained when in the professional judgment of a PSCO i.e. he considered unsafe to permit the  ship to proceed to sea before the deficiencies identified has been rectified.

a. Failure of main propulsion, electrical, pumping and steering

f. Absence or failure of mandatory navigational system and equipments.

h. Number, composition or certification of crew not corresponding to safe manning certificates.

a. Insufficient stability or ability to calculate stability conditions

b. Significant area of damage/corrosion/pitting of deck and hull effecting seaworthiness.

a. Absence or poor condition or failure of OWS, ODMCS and alarms.

a. Lack of or insufficient crew member’s certificates / endorsements.

c. Competency of crew members not adequate for the duties assigned for the safety.

d. Security of the ship and prevention of pollution

e. Insufficiently rested watch keepers for the first and relieving watch duties at the commencement of the voyage.

a. Insufficient food and potable water for next voyage.

b. Excessively unsanitary condition onboard.

c. No heating in accommodation if ship operates in low temperature.

Once the detained order has been placed on a ship it is likely to remain part of the historical port state records for that ship and be displayed on web for at least 3 years. A detention order might include an instruction that the ship has to remain in a particular place or move to anchorage or other berth. The order should specify the circumstances tat would allow the detention to be released. The fact that a ship has been detailed should be clearly stated on report form ‘A’

Procedure for rectification of deficiencies and release.

1. It is the responsibility of the owner / manager to inform the flag state and class about the deficiencies and detention.

2. Port state will normally notify the flag state for any detention.

3. Flag state or classification society acting on its behalf may attend the ship to help resolve the problem in this case PSCO might agree to the remedial action proposed by the surveyor and allow him to oversee the repairs.

4. The master and/or the ship owner would need to authorize the repair work to be carried out in presence of the surveyor.

5. There will be associated costs to cover. Port state inspection costs will of course also be charged to the ship. Detention orders are lifted once all payment has been received in full.

6. When deficiencies which cost a detention cannot be remedied in the port of inspection, the ship concerned may be authorized to proceed to the nearest appropriate repair yar available, as chosen by the master and the port state authority, provided that the condition determined by the competent authorities of the flag state and agree by the authority of the port state are complied. Such conditions will ensure that the ship can proceed without risk to the safety and health of passenger or crew or risk to other ships, or without being an unreasonable threat to the marine environment. The flag state or the recognized organizations acting on his behalf should issue single voyage certificate or preferable endorse existing certificates (to proceed to a repair yard, normally in ballast). The terms of release should be acceptable for the port state.

7. On the condition that all possible effects have been made to rectify the deficiency the ship may be allowed to proceed to port where any such deficiency can be rectified.